The Constitution-Free Zone of the United States 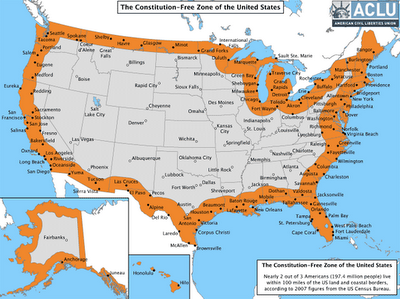 Hooray and hugs to Pastor Steve Anderson, our active military and veterans, Dads, patriots, those who believe in or support and/or who post in defense or support of them, our freedom, liberty, rights, the U.S. Constitution, and opposition to government (i.e. injustice system) abuse of authority, citizens, power and taxes!
Our government is civil servants who answer, serve, submit to, work for and are paid by us, not vice versa!!

The Border Patrol, Dept of Public Safety, DHS, FBI, highway patrol, Clintons, Obama, police, State of Arizona, Maricopa Co. Sheriff Joe Arpaio, most judges, many of our arrogant, complacent and corrupt government officials are guilty of abusing power, intimidating, oppressive, punitive, terroristic and treasonous actions under color of law, including undermining, violating and warring against the U.S. Constitution. Globalist, socialist, badge-kissers, politician-kissers, Taser-kissers and tax-return-lovers defend and support them and their abusive actions.

These domestic/internal checkpoints/roadblocks, the supposed illegal immigration policy, the War On Drugs, and the War On Terrorism are really a conspiratorial cover and deception to criminalize, dominate and terrorize the American population, steamroll and wage a War On The Bill Of Rights, innocent citizens and their liberty and privacy, and search and seize their personal information and property as they please!

Law enforcement agents are more hinderance than help. I've been harassed many times unnecessarily. I know of at least four crimes committed against me or my family for which the authorities hav failed or refused to investigate or arrest. I think their main agenda are to deceive and entrap (regardless of guilt or innocence), consume coffee and doughnuts, hold a double standard between them and the public about: asking and answering questions - obeying laws - the right to carry and use arms - and shining flashlights at you, to interfere in civil matters, intimidate with badges guns and uniforms, invade people's privacy, occupy the public like an invaded military, obstruct justice, help raise revenue through citations and fines, spend (waste) tax revenue, suspect and detain and interrogate people as guilty until proven innocent, and to terrorize and torture with guns, Tasers, and other means. Citizens and taxpayers are their masters. Law enforcement agents are public servants, just as any other government employee or official. They are hired to protect and serve but don't really care about citizens' families, justice, liberty, privacy, property, rights, safety, sovereignty, truth, etc. like We The People do !

There's a double standard and like a taboo between law enforcement officers/personnel and the public about the right to carry arms and use them or other force for defense. "They can but you can't." When civilians fight back, otherwise use force or shoot a cop they get "the book thrown at them", are condemned and reviled by all other cops, the whole justice system and society. When cops beat up, demean, dehumanize, humiliate, intimidate, murder, mutilate, shoot, Taser, terrorize, torture or traumatize people they usually are only put on temporary "administrative" leave and the incident is merely cursorily or nominally "investigated" or "reviewed" before returning to work as usual. In civil and criminal lawsuits the decisions are often in cops' favor. Courts are usually persuaded by cops' evidence and testimony over civilians'. Abuse and corruption of power is so prevalent among cops and other government agents that they each should be considered just as another armed individual and potential threat rather than legal and reliable protection. In a group they can be as dangerous as, and should be considered as, a criminal or military organization.