Email ThisBlogThis!Share to TwitterShare to FacebookShare to Pinterest
Labels: hiking

Later this month, I’ll be going on a backpacking trip in Northern California. I went on the exact same trip eleven years ago, four days after getting married. During that trip, I wrote my wife a long letter which included a few details about the trip. Eleven years later, I just found that letter in a box of memorabilia along with pictures from the trip.

I have removed all the personal subjects and outpourings of love to my wife (which was the majority of the letter) and present here only the details of the hike found in the letter.

It’s the evening of the first day of the backpacking trip. If my writing isn’t too good, that’s because it’s getting dark. We did a lot of hard hiking today with some pretty steep uphills and downhills. We had a long way to hike anyway, but then we took a wrong turn that added about 2 extra miles. I really like the strenuous exercise, and I’m having a lot of fun hanging out with Clint, Mike, and Joel. It’s really beautiful here. We’ve seen a lot of bear droppings along the trail, but no bears yet. 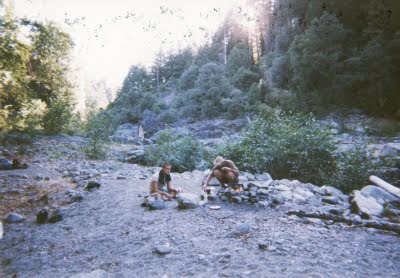 Breakfast (me on the left) 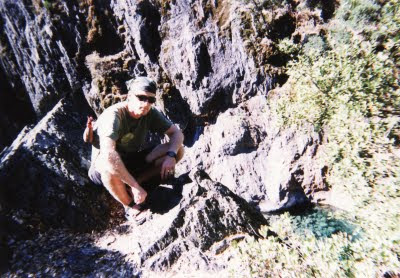 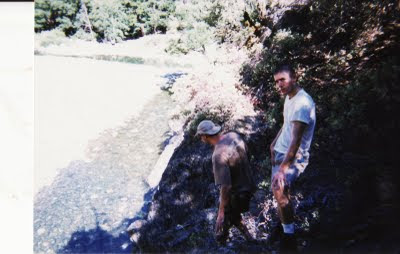 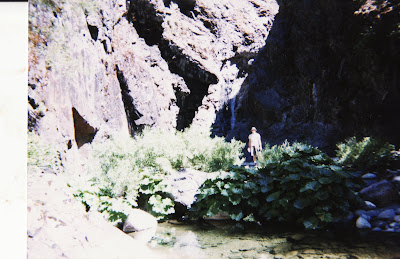 The sun is just going down after the second day. We hiked extra today so we can just stay in this cool place where we are all day tomorrow. Then on the last day, we’ll get up early and hike out. We didn’t start backpacking until 1:30 this afternoon, so for the morning, we walked to this great double waterfall with really deep lagoons at the bottom. I can’t even describe how cool it was; you would just have to see pictures of it. We jumped off some really high rocks into the water, which was a little scary the first time, but after that it was cool. The place we’re at today seems to have better and higher rock jumps. We saw a rattlesnake on the way to that place this morning. I think it had about 7 rattles, making it about 7 years old. Then about 200 feet from our current campsite we saw a bear! I told you there were bears out here! I just finished bathing myself with soap in the freezing river water. My beard is starting to grow in nicely; it’s a shame I’ll have to shave it off on Monday so I can go look for a job. We’ve all been getting along well, except I really made my uncle mad with some things I said at lunchtime (of course having to do with the Bible/religion. I love backpacking, and I really want to do it again. 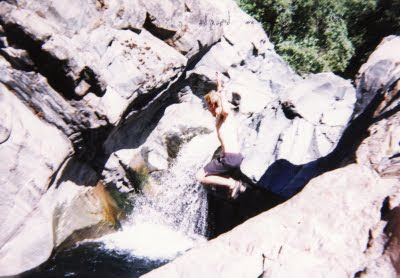 Clint's first jump of the trip 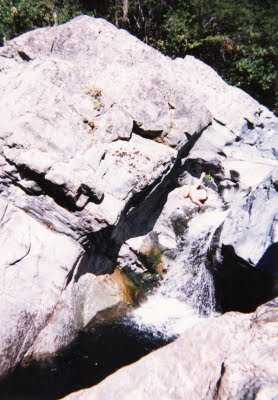 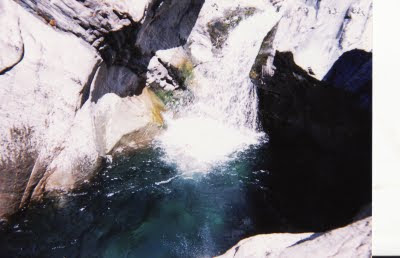 Me in the bottom of the waterfall (look closely) 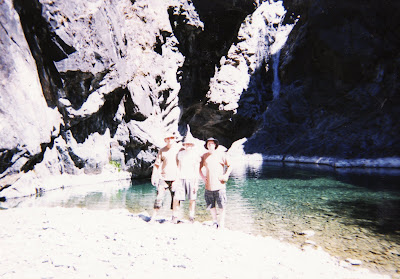 Me in the middle
Now we’re lying on our backs on the rocks looking up at all the bats swarming around. They just woke up now that it’s getting dark. The sky is all just kind of a light solid purple color. I’m getting a little tired of dehydrated foods. I just wish I could have some Burger King right now…

I just woke up on day 3. It was a little hard to sleep because we were afraid of that bear getting into our stuff or getting into us. Uncle Mike has been to this place 10-11 times. 5 of those times he’s seen a bear, and 3 of those times someone’s backpack was eaten into or stolen by a bear. We just finished jumping off some 30 foot high rock jumps (we used a rope to measure the height). We found a big pile of fresh bear dung about 35 feet outside our camp. It must have been deposited since yesterday evening, so we moved our camp for tonight down closer to the water. Tonight’s our last night so Clint and I are going to sleep up on some high rocks, just to do something different. The bad guys came by about an hour and a half ago, but luckily we had already put out our campfire that we had cooked our lunch with. They were warning us about how hard our hike out tomorrow will be, but I’m sure they were exaggerating a little. 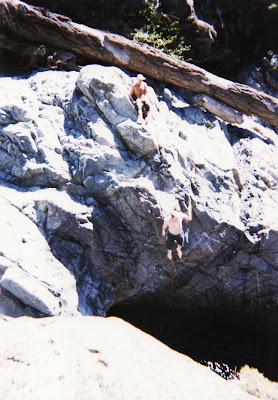 I call this picture "Joel descends into the pit" 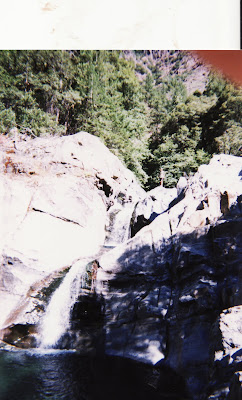 Clint atop the rocks
Well, it’s getting dark on the 3rd night. I’m a little anxious to get home at this point. I’m looking forward to the hard hike out of here tomorrow morning. I just organized my pack for it and burned whatever extra food I had that I know I won’t eat. We’ll be climbing up to a place 3,000 feet higher than we are now.
Posted by sanderson1611 at 5:53 PM 1 comment: