"Know ye not that the unrighteous shall not inherit the kingdom of God? Be not deceived: neither fornicators, nor idolaters, nor adulterers, nor effeminate, nor abusers of themselves with mankind," - 1 Corinthians 6:9

So Paul Chappell is blessing us with a church plant here in Tempe called Citypoint Baptist Church. The Pastor’s name is John Guy, but I call him “Pastor Polka Dot.” When I first heard about him, I clicked on his website and saw him in this trendy polka dot shirt. His Twitter profile shows him in a pink polka dot shirt and super skinny jeans, and what did I find on facebook? More polka dots! I’ve now seen this guy in at least four different polka dot shirts, so the nickname I gave him definitely fits. I would expect any grown man who names the name of Christ to be manly, but this John Guy is a pastor!


Even a casual internet search of secular websites will tell you that polka dots are normally worn by women and that men in polka dots are very “fashion forward” and run the risk of looking “flamboyant.” In fact, Pastor Polka Dot is so cutting edge, there’s a picture of him on facebook in skinny SHORTS. I’ve been preaching against skinny jeans for a while, but I didn’t even know skinny shorts were a thing! And let’s face it, men who try to show off their body look effeminate and queer!

We’ve got a bunch of skinny-jeans wearing sissies coming to Tempe to start a church. Not only does the pastor look effeminate, but he’s bringing music director, Mark Rasmussen Jr., whose mannerisms are way worse.


I mean, I hope Mark is straight because he comes from a good family, but I’m having a hard time believing it. If these guys don’t want to be accused of being queer, then why do they look like queers and act like queers!? Why don’t they start dressing like men? You may not think this is a big deal, but this is the leadership of a fundamental Baptist church! John Guy is currently the assistant pastor at Lancaster Baptist Church. Men are being taught by example to be effeminate, which is a sin. The Bible teaches that people are an abomination when they wear gender bending clothing.


Citypoint will have no standards. Their music style is pretty much the Back Street Boys minus the drums, and the women wear whatever they want. The music director posted a video of him proposing to a woman wearing a bikini top and short shorts, and in the same video he announces the new church plant in Tempe! At another point in the video his wife is wearing jeans with holes in the knees. These aren’t new Christians or backslidden laymen in the church. These are staff members from a Bible college, and this is what they are publicly posting.


The woman shall not wear that which pertaineth unto a man, neither shall a man put on a woman's garment: for all that do so are abomination unto the Lord thy God.—Deuteronomy 22:5

If you’re into this touchy-feely crap and want to go to a church where the pastor’s wife wears the pants, there’s a church starting for you in Tempe. Honestly though, this new church isn’t needed. We’ve already got plenty of contemporary churches in this area. It’s a shame when many of the IFB churches today are identical to the non-denominational contemporary churches, with the only difference being that they use the KJV. I thought we as independent fundamental Baptists were old-fashioned and believed men should look like men and women should look like women!


Even the name of the new church in Tempe is patterned after the typical non-denominational liberal church. Citypoint Baptist Church will be meeting at the Improv, a comedy night club. The church is such a joke it meets at a comedy club! Of all the storefronts and office space available in this area, they chose to meet in a bar so they can have purple lighting and a fancy sound system for their faggoty music. 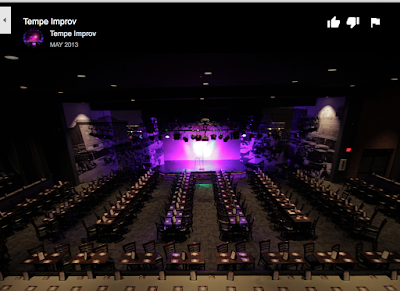 It’s easy to rip on guys like Pastor Polka Dot and his whiny worship leader, but effeminate clothing on boys can creep into even good churches. Young people see this kind of clothing in advertisements and the media, and they have a tendency to conform to whatever’s in style. It doesn’t mean they have queer tendencies, but it means that they are following people who are queer and wicked. As fathers who are old enough to know better, we need to crack down on our sons if they start to wear this type of clothing. If people want to conform to this world and come to church in skinny jeans, I’m not going to police them. It’s the job of the parents to regulate the clothing in their own house, but I can promise you that my family and the staff members of this church and their families are going to wear clothes that fit!