What does the Bible say about the Jews who live in modern day Israel? This question is answered in Revelation 2 - the second episode of “The Book of Revelation” series. This 22 hour series is directed and produced by Paul Wittenberger (After The Tribulation and New World Order Bible Versions), and Preached by Pastor Steven L. Anderson, Pastor at Faithful Word Baptist Church in Tempe, Arizona.

This episode confronts the controversy surrounding the notion today that the Jews of modern day Israel are God’s Chosen People. See for yourself if the Jews today are anything like the Old Testament Jews. Follow along in your King James Bible and see for yourself what the scriptures have to say. Set aside pre-conceived ideas of the world, and let the truth be revealed.

It also covers topics such as:

So grab your King James Bible and enjoy chapter 2 of “The Book of Revelation”.

“Let no man deceive you by any means: for that day shall not come, except there come a falling away first, and that man of sin be revealed, the son of perdition;” 2 Thessalonians 2:3

7 Churches, False Apostles, Church of Ephesus, First Love, Soul Winning, Dispensations, Universal Church, Overcoming the World, Second Death, Tree of Life, Paradise, The Three Heavens, Synagogue of Satan, Crown of Life, Killed for the Cause of Christ, Cast into Prison for the Cause of Christ, Circumcision, Anti-Christ and Anti-Christs, Judeo-Christianity, Zionism, God’s Wrath, Joseph Smith, The Book of Mormon, Pearl of Great Price, 10 days Tribulation, The Feasts of The Lord, Hebrew Calender, Blowing of Trumpets, Daniel’s 70th Week, Abomination of Desolation, The Trumpet of Jubilee, The Rapture, The Great Tribulation, White Stone, Women Teaching, Christians repenting of their deeds, Meaning of the word ‘Tribulation’, Depths of Satan, Reigning with Christ, He that hath an ear,

Here are another 12 Israel Moments. Also, check out this great new webpage for the movie Marching to Zion! 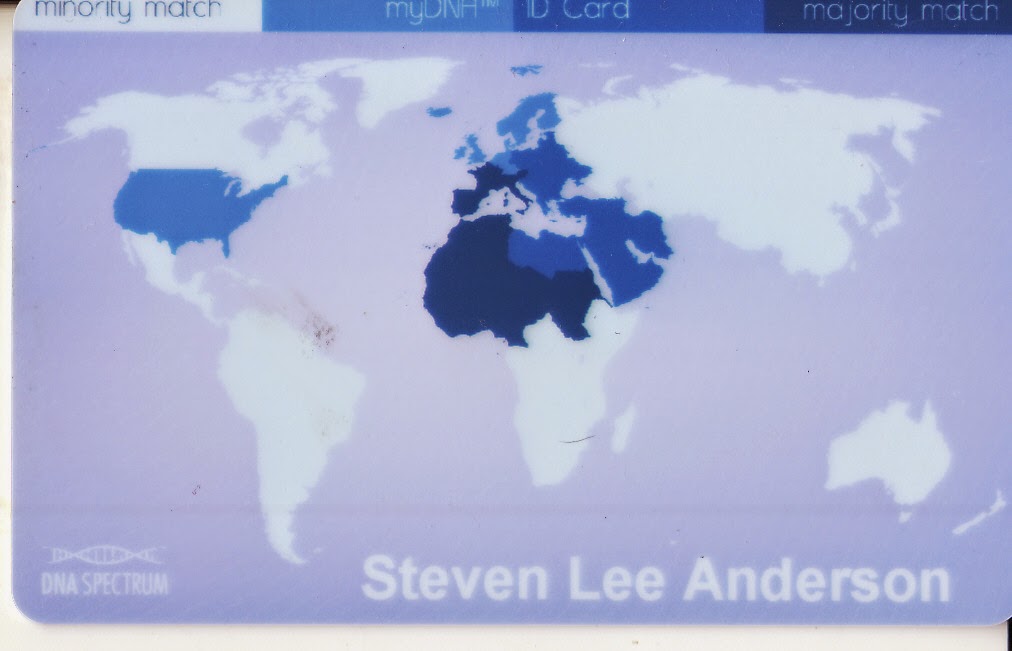 I've been doing a lot of research about genealogies and DNA lately while working with Paul Wittenberger on a new documentary film "Marching to Zion," so I decided to get my DNA checked for ethnicity. In the past, when I had studied my genealogy, the only nationalities I had ever been able to come up with were English, Irish, Swedish, Danish, and Swiss, as I reported in a previous blog post. The results of my DNA testing, which are reported to be 99.99% accurate, showed how little I know about my ancestry, even having done a lot of research. Many people think they know exactly what nationality they are, but things are much more complicated than that. I thought of myself as being 100% white European, but it turns out that more than anything, I am ethnically a Moroccan Berber from Northwest Africa and a Spaniard!

Why do we know so little about our ancestry? First of all, just because a person is from a certain country or has a certain last name, that doesn't mean that they have that ethnicity. For example, just because your ancestors are from England, that doesn't mean they are Anglo-Saxons. Spain and England are very close together, and most Spanish people are white, so people from Spain could easily end up in England and vice-versa. The reason we think of Hispanic people as being brown is that we are thinking of Mexicans who are a mixture of Spanish and American Indian. Also, Morocco is very close to Spain, and all of these countries were very heavily involved in sea trade, which would involve a lot of people moving back and forth from place to place.

Not only that, but looking at your family tree does not take things like adoption and adultery into account. How in the world could you know if your ancestors from 200 years ago were adopted or were the product of an adulterous affair by your great great great great great great grandmother? Stranger things have happened.

My DNA was tested against 400 people groups, and I was given a list of the top 50 matches in order of prominence. The reason that certain people groups are repeated (for example, I am a Moroccan Berber 7 different ways) is that there are different subgroups within each ethnicity, and I had genetic ties with various types of Moroccan Berbers. Not only was Moroccan Berber listed 7 times in my results, 5 of them were in my top 10!

My #2 most prominent ethnicity came out as Spanish. Not only that, but Spanish was repeated a total of 7 times. Polish showed up a little lower on the list (#5) but was repeated 8 times. 9 of my ethnicities are simply labeled as "white," meaning a homogenous mixture of white people from the U.S. and Canada (this would encompass a lot of English, Irish, Swedish, Danish, etc., basically, everything I thought I was!). Some of the other things on the list that were interesting are Romani (Gypsy), Arab (I'm a son of Ishmael! haha No wonder I defended him in a sermon recently!), Egyptian, Native American, etc.

Once you learn about this, it become silly to be so hung up about "race." We are all mixed! I guess I can start calling myself an "African American" now! The Bible was right when it said that all nations are of one blood. If anyone hasn't heard it already, I would strongly recommend my recent sermon that proved that all of us are direct descendants of Abraham, Isaac, and Jacob, one way or another.

Here is the full listing of my results followed by my "Certificate of Ethnicity:" 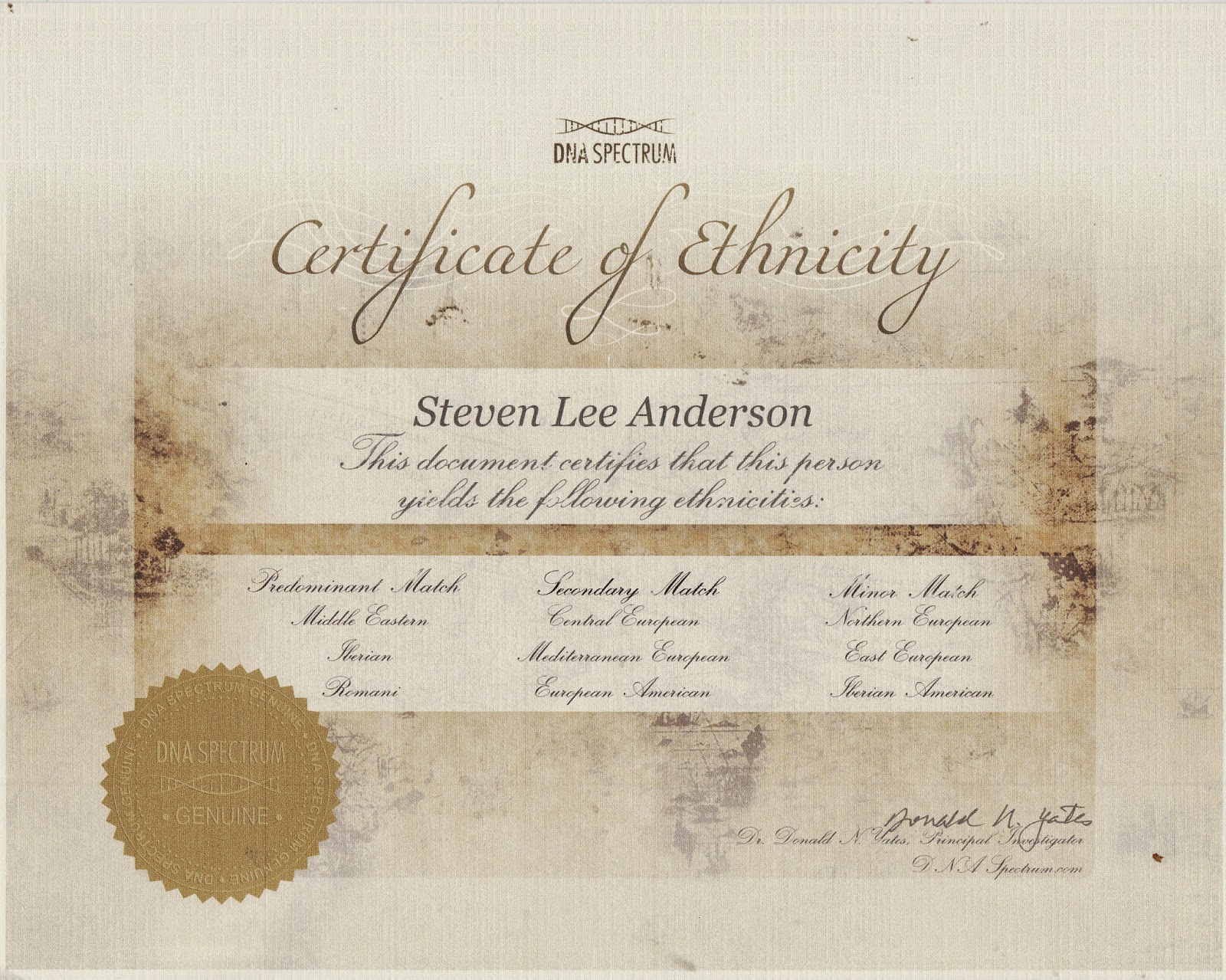 In case anyone is interested, the company that tested my DNA is at dnaspectrum.com.
Posted by sanderson1611 at 2:37 PM 3 comments:

This series of short videos will use literally hundreds of clear Bible verses to prove that the Jews are no longer God's chosen people, but that rather, we as believers are God's chosen people, whether we be Jew or Gentile. The videos will also prove that the modern day state of Israel is a fraud. There will probably be about 100 moments in all. Here is a synopsis of the first ten:

Many more moments are coming soon!

Revelation 1 - Will there be a Pre-Tribulation Rapture?

The Book of Revelation - Will There be a Pre-Tribulation Rapture? (1 of 22)

What does the Bible say about the Second Coming of Jesus Christ?  This question is answered in Revelation 1 - the pilot episode of “The Book Of Revelation” series.  This 22 hour series is directed and produced by Paul Wittenberger (After The Tribulation and New World Order Bible Versions), and preached by Steven L. Anderson, the pastor of Faithful Word Baptist Church in Tempe, Arizona.

This episode delves right into the most debated subject in the word of God, the second coming of Jesus Christ.  It will prove that Jesus Christ is indeed coming back, but not until after the Tribulation.

It also covers topics such as:

So grab your King James Bible and enjoy chapter 1 of “The Book of Revelation."

“Let no man deceive you by any means: for that day shall not come, except there come a falling away first, and that man of sin be revealed, the son of perdition;” 2 Thessalonians 2:3

KEY TOPICS/KEYWORDS:
The Book of Revelation, Chapter 1, Revelation 1, Rapture, 7 Stars, 7 Golden Candlesticks, Stem of Jesse, Great Tribulation, Sun and Moon Darkened, Great Earthquake, Distress of Nations, Jesus Ascension and Decent from Heaven, Pre-tribulation rapture fraud, Trump of God, Comforting One Another with the Resurrection, Parable of the Fig Tree, Great Apostasy (falling away), Jesus Prophesying His Return, Warnings against tampering with God’s Word, Believers Seeing The Signs of the Coming of Christ, Sun Black and Moon as blood, 7 Spirits, Key Verse 7, 7 Churches, Appearance of the Son of Man, Jesus has the Keys of Hell and Death, The Word of God the Two-edged Sword,