Enough with the Animal Worship! 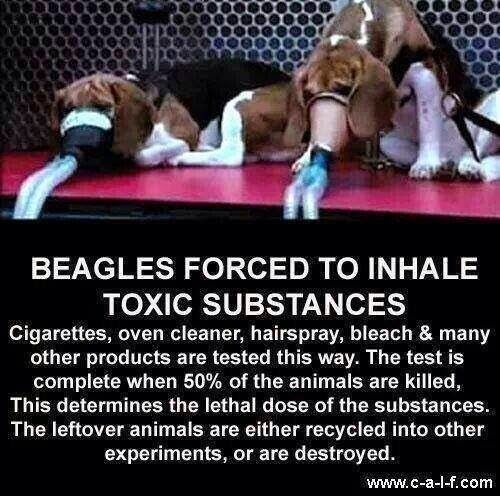 This picture has been going around facebook with the caption: "Can't we just do this test on the people who did it to these beautiful, innocent beagles?" People are commenting things like, "This makes me feel violent," and, "This is wrong for so many reasons."

Actually it isn't wrong at all. They are testing it on animals in order to keep humans safe.What is really wrong is the caption under the picture that says, "Can't we just do this test on the people who did it to these beautiful, innocent beagles?" What kind of a sick pervert would want to murder human beings because of how they treated an animal?! Jesus sent 2,000 pigs off a cliff to save 1 human life. People need to stop treating animals like they are people or something.

Obviously I agree that it was a stupid thing to do, and that she should have been punished by her parents (give her a spanking and be done with it!). However, in my opinion, 80 hours of community service is more than enough punishment. Anyone who wants to see her put in a microwave is mentally ill, and yet that comment was not out of the ordinary. Comments like that are the norm for stories like that. By the way, the cat was not even harmed and is doing fine (what a relief!)


Something is seriously wrong with our society when we put animals on a pedestal. This animal-worshiping trend did not come from the Bible, and Christians should beware of adopting this perverted view of animals that elevates them to the level (or even above the level) of human beings. God created animals to be slaughtered, butchered, and eaten by humans. Their feathers are in my pillow, their skin is on my shoes, and their fat is in my soap!
Posted by sanderson1611 at 10:37 AM 6 comments:

Email ThisBlogThis!Share to TwitterShare to FacebookShare to Pinterest
Labels: animals

So today a lady from ABC 15 came and interviewed me to get my reaction on the Supreme Court ruling where the federal government is forcing Arizona to recognize homo marriage. The lady who interviewed me said she called at least 12 other pastors, and none of them were willing to come on the news and be negative about the Supreme Court ruling. They were all too busy "loving people instead of condemning what they do." My message to lame pastors: "The world cannot hate you; but me it hateth, because I testify of it, that the works thereof are evil." - John 7:7 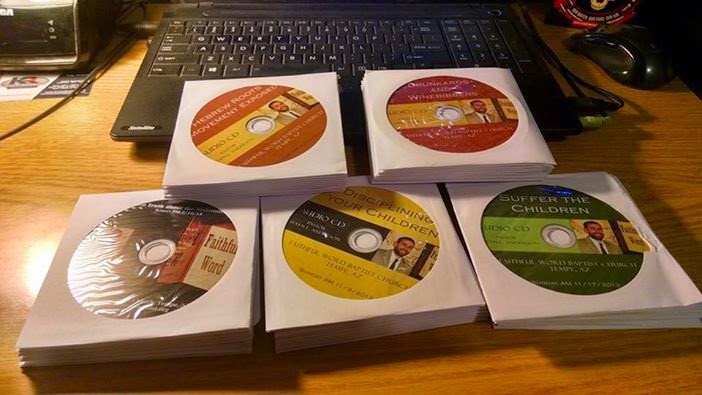 New preaching CDs are in! These are the titles that are available:

I also still have some of these left:

Email your mailing address to me at faithfulword1@gmail.com, and I will send you preaching CDs free of charge. Let me know which ones you want and how many. Share them with friends and family! 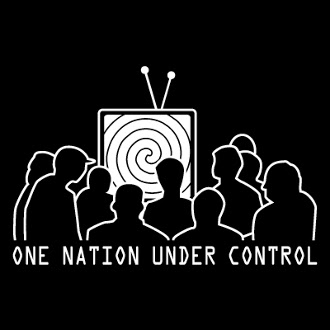 There is a lot of media propaganda right now stirring up hatred against Muslims. Wake up! The Jewish bankers want to make sure that we are continually at war in the Middle East to

(1) make billions of dollars funding both sides of the war
(2) protect the racist, genocidal state of "Israel"

Don't get me wrong. Islam is a wicked religion, but so is Judaism! Neither religion believes that Jesus is the Son of God. In fact, the Jews' most holy book, the Talmud, says that Jesus was a bastard and that Mary was a whore. Why should we get involved in fighting in the Middle East? We should stay out of it. The Jews are under the curse of God for rejecting Jesus, so whatever bad thing happens to them is the judgement of God.


When you share the Jewish-controlled media's lying propaganda on Facebook and other social media, you are helping to continue the endless warfare, bloodshed, misery, and death. Instead, focus on exalting JESUS and the Bible, not the political propaganda of the month. We should rally around JESUS, not America, Israel, a political party or anything else. Jews and Muslims will alike burn in Hell, and we as CHRISTIANS will inherit the earth!

I just gave the Gospel to two different Muslims while out soul-winning yesterday evening. One was Nation of Islam and the other was a Sunni Muslim. Neither of them got saved, but they both listened to the Gospel. Over the years, I have gotten several Muslims saved, but I have never won a devout Jew to Christ. They rarely even listen to the Gospel.

One time an Orthodox Jewish young lady in Tempe listened to the entire Gospel and was close to getting saved, but that was a very rare situation. They usually shut you down right away and have zero interest in the Gospel of Jesus Christ. Both Jews and Muslims are unsaved, but Muslims are much more receptive to the Gospel. Anyone who has done a lot of soul-winning could probably tell you the same thing.

The bottom line: be careful not to be brainwashed by the media into hating all Muslims, and do not allow them to stir up "war fever" in you. The wars that are being fought in the Middle East have nothing to do with protecting us here at home. Instead of hating Muslims, we should love them and give them the Gospel. "But they're trying to kill us!" No, that is just something you saw on TV. No Muslim has ever tried to kill you or anyone you know. "They hate us!" They only hate us because we drop bombs on them and give weapons to their enemy, Israel. If we stayed out of it and minded our own business, they wouldn't hate us.

Email ThisBlogThis!Share to TwitterShare to FacebookShare to Pinterest
Labels: zionism

Full Movie Now Online - After the Tribulation in Spanish