Today we left late in the morning to head down to Tucson, so I could spend a gift certificate I had received for Summit Hut. I had wanted to buy a pair of specialty running sandals, and no store in Phoenix seems to carry them. They could have been ordered online, but I figured it would be better to try them on and run around the store in them to make sure that I liked them before buying them. This is the model I ended up going with:

Then while we were down in Tucson, we found a nice fish and chips place where we could have lunch. We decided to bring the baby on this particular outing since we were going all the way to Tucson and didn't want to worry about being gone too long. After fish and chips, we walked over to a gelato place where I had some kind of chocolate and peanut butter gelato, and Zsuzsa had Tiramisu. We then just spent a while wandering around, chatting, and enjoying the nice weather. 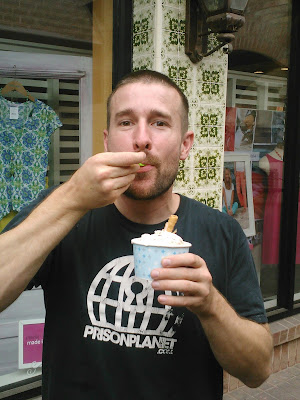 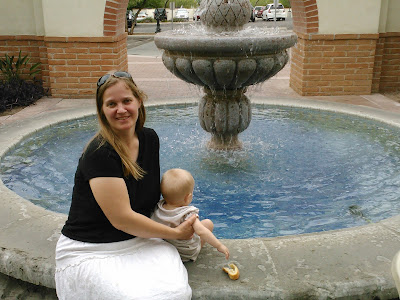 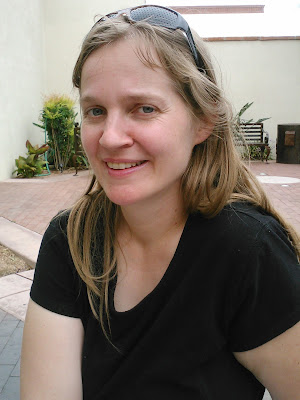 After driving back to Phoenix and spending about an hour at the house, we headed out for our next activity: horseback riding! 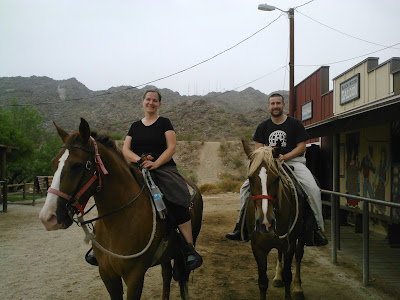 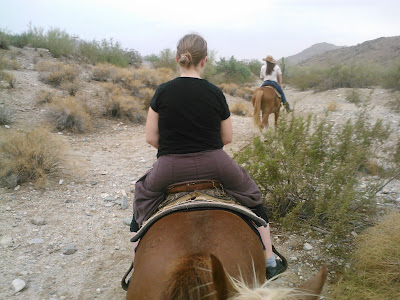 We rode for about an hour on trails at South Mountain to reach a steak house where we had dinner. Then after dinner, we rode back down the same trails, but this time in the dark since night had fallen. Today is my birthday and baby Stephen's birthday, so we started out the day by opening presents and having blueberry pancakes for breakfast. I received a book about trail running from Zsuzsa, a gift certificate to an outdoor store, and from my son John I got a pair of swim goggles.

After breakfast, Zsuzsa and I drove up to Scottsdale to go swimming at a hotel there. We were hoping that no one would be swimming at that time because although Zsuzsa and I were dressed modestly, we obviously didn't want to look at anyone else swimming half naked. When we got there, there were several people in the pool, so instead of swimming there, we hopped the fence to the private, elite "seclusion" swimming pool, which we had all to ourselves! 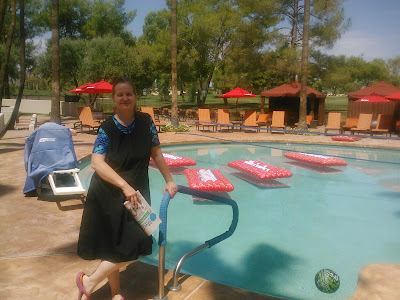 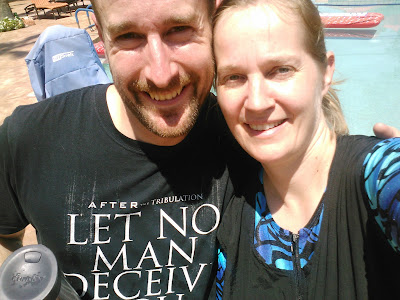 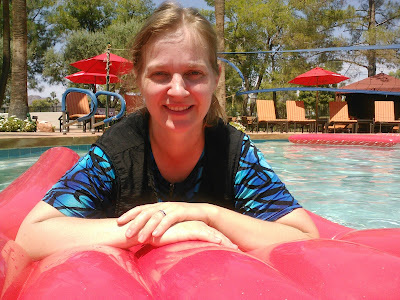 After stopping at the house for lunch, we went out for some afternoon shopping at Ultimate Consignment and a few other stores. Then we went to the Wednesday night church service where we broke our Wednesday night attendance record by having 91 in the service! After church, there was a birthday party for me including barbecued hamburgers, hot dogs, sides, cake, and ice cream. I also received a lot of really cool gifts from some of our church members. What a fantastic birthday! 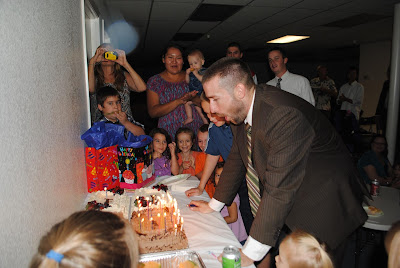 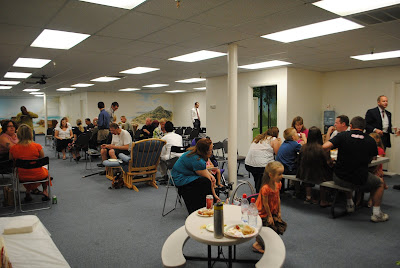 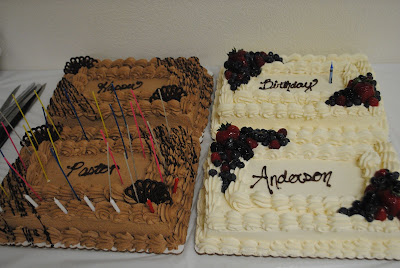 My birthday is tomorrow, July 24, and our wedding anniversary is coming up on August 13, so we are taking a little "stay-cation" this week to celebrate. Zsuzsa and I don't get to go out together alone very often because we never leave our children with anyone except my mother. Mom was nice enough to offer to come out from Sacramento and watch the kids for us this week, and we were quick to take her up on the offer!

In January, we took a 3 day trip together where we took only baby Stephen with us. We had a wonderful time, but he hated every minute of it because (1) he missed his brothers and sisters, (2) he prefers to be at home, and (3) babies always hate it when their parents are affectionate with one another (afraid of being replaced too soon? haha). This time, we decided to stay in town, so we could go places BY OURSELVES (not even bringing baby Stephen!) since we would only be gone on our  outings a few hours at time.

Our stay-cation began Tuesday evening with a trip to Castles and Coasters! We rode a super-high zip line, did a rope obstacle course, and rode most of the rides. Our favorite was the log flume, which we rode 3 times. 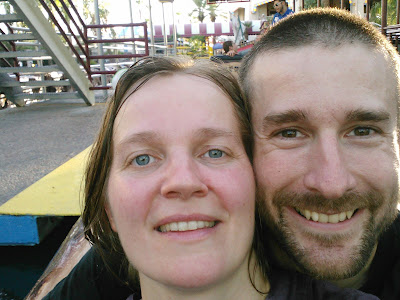 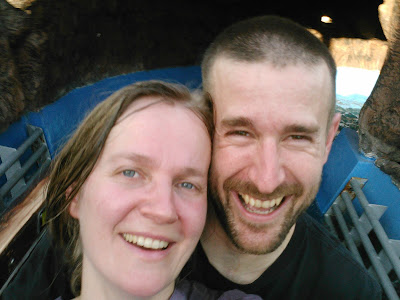 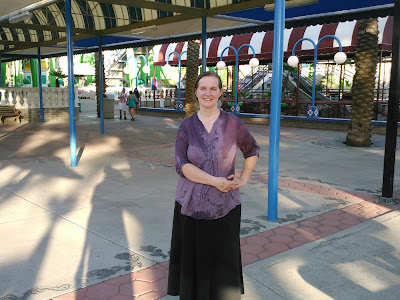 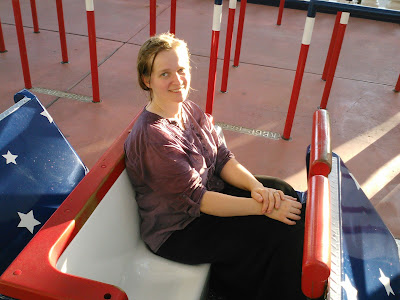 After Castles and Coasters, we went by the house for about an hour so Zsuzsa could do story time with the kids and nurse the baby down. Then it was off to Brazilian Bull Steakhouse! 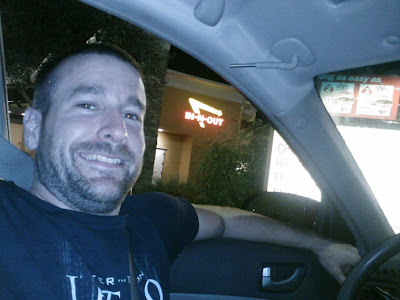 Google Places said they were open until 10:30pm, but we go there at 9:25pm, and they were already closed! In N Out it is! Same thing, right! haha

"Better is a dinner of herbs where love is, than a stalled ox and hatred therewith." - Proverbs 15:17


It worked out for the best anyway because it gave us more time for the rest of our evening! We are going to go to the Brazilian Steakhouse on Friday night instead.
Posted by sanderson1611 at 8:31 AM No comments:

Every Monday, a new chapter will be released until all 22 are online. DVDs will ship in August for those who order the entire 5 Disc, 22 Hour box set. Please share these videos with everyone you know. The time is at hand!


There has never been a time when it was more necessary to read and understand the Book of Revelation than right now. Each day brings us closer to what the Bible calls "the end of the world." Warfare, famines, disease, natural disasters, and persecution of Christians are coming, but do you know what to expect? Are you aware of Satan's plans for a global government and new world order? Many today are in the dark about these events when the answers are all in the Bible.

In this scripture-packed series, Pastor Steven L Anderson takes you verse-by-verse through the Book of Revelation, explaining every line and leaving no stone unturned. Brought to you by film-maker Paul Wittenberger, director and producer of AFTER THE TRIBULATION, these 22 sermons will cut through the disinformation and false doctrine and expose solid biblical truth. By the end of this series, you will have a clear understanding of every chapter in the Book of Revelation.
Posted by sanderson1611 at 8:10 AM 1 comment: