Why I Started Running Barefoot 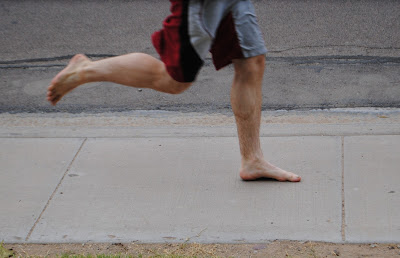 Many people have asked me about why I run barefoot or in very thin sandals or minimalist shoes. I actually discovered barefoot running by accident, and then later I read about the benefits and understood why highly-cushioned running shoes are bad for your feet and will likely lead to running injury.

I discovered barefoot running one day a couple of years ago when I was jumping rope for 20 minutes and wanted to segue directly into a run. I didn't want to stop and put my shoes on because I wanted to go straight into the running without taking a break, so I just took off running barefoot. I ended up running for an hour, which was longer than I had ever run before at that time. I noticed immediately that I could run faster and further when I was barefoot. However, I was doing too much too soon by running for an hour barefoot the first time out, so the bottoms of my feet were hurting when I finished the run.

Then I read a few books about barefoot running that explained that the injuries I was suffering were due to the cushioned running shoes I was wearing that were causing me to run with bad form and ironically were increasing the impact on my joints. I started running again, rotating between running barefoot and running in minimalist footwear. This time I started out slowly and gave my feet and legs a chance to get used to running barefoot.

Since that time (5 months ago) I have been doing a lot of running and have had absolutely no injuries, knee problems, shin splints, etc. I have also been doing a lot of running on steep hills and slippery slopes at South Mountain in minimalist footwear without so much as a stumble or twisted ankle. I have run 8-10 miles barefoot multiple times and felt great. I have run for over 3 hours straight in minimalist shoes and felt great afterward.

This is my daughter, Rebecca (age 4), who has had absolutely no running training or instruction. Yet she naturally runs with perfect form in bare feet. Why? Because this is the way God designed us to run.


Because your feet are one of the most sensitive parts of your body, they are great at telling you immediately if you are doing something wrong. If you run barefoot, your body will instinctively change the way you run to minimize pain by minimizing impact. The biggest thing that will instantly change is that your stride will shorten (i.e. you will take smaller steps), and you will land with your forefoot first instead of your heel. After landing forefoot first, the rest of your foot, including your heel, will make light contact.

Shoes provide a false sense of security by cushioning your feet and making them comfortable. This causes you to come down much harder than you would in bare feet. Your feet don't feel the impact, but the impact is still there and shoots up your leg into your knees, hips, lower back, etc.

By cushioning and babying your feet in high-end running shoes, you are also making them weaker. Since they are being supported by the shoes in so many ways, they no longer need to support themselves. Therefore they become weak and lazy which leads to poor running.

Remember, running barefoot is much different than running in traditional running shoes. Therefore, you must start very slowly, even if you are an experienced runner. Running barefoot should be treated as a new activity and should be eased into. For example, if you are running 20 miles per week in running shoes, you can't just start running 20 miles per week barefoot. Start by walking barefoot and then graduate to running very short distances.
Posted by sanderson1611 at 9:49 AM 19 comments: