This letter was written by one of our church members Bro. Chad Morgan:

Last year my family and I visited El Cajon, CA to meat up with some new friends to go out into the community and share what the Bible says about Heaven. At that meet-up Michelle (my wife) and I were befriended by two ladies, a mom and daughter, Debbie and McKenzie Schroeder. These ladies had a smile on their face. Debbie is a dedicated mom; McKenzie is a kind young lady and a diligent student.

Today, when I came home I was greeted with the news that Debbie and McKenzie were ARRESTED while knocking doors of local Chandler residents to invite people to church and to share what the Bible says. (Our church practice 100% of the time is to leave when a resident tells us to do so). We are not trouble makers!

If it wasn't for the first hand accounts of friends who were with them and the video evidence that is now circulating, I wouldn't have believed it. Here are my questions for the Chief of Police, Chandler:

Is it normal procedure for the Chandler Police Department to arrest women who are knocking doors to give out information about their church or to ask residents if they would like to know what the Bible says?

How does a SERGEANT (Donna Reno) in the Chandler Police Department become so ignorant of the law of our nation and end up arresting law abiding citizens? The group even had a document in hand that Chandler officers ignored, while violating their 1st Amendment right. You wrote on the Chandler PD website, "We are committed to ensuring that Chandler remains a safe city where people want to live and work. Our officers are well-equipped, highly-trained, and engaged in the community. Our employees are a dedicated and enthusiastic group of professionals who take great pride in their work." How are Chandler officers "highly-trained" when they make bogus arrests based on what one or two citizens allege, instead of making decisions based upon law? Many of the locals wanted to hear our message or receive our information.

Why did officers lie to two other members of the group (not Debbie and McKenzie) and say that they had already been told to leave the community just to coerce them to leave? No community can trust officers who are lying whether intentional or not.

Where is the common sense in the decision to charge an 18 year old with "tampering with evidence" because instinct told her to pick up her mom's personal effects when they fell to the ground because an officer decided to grab her mother?

On the Chandler Police Website you wrote, "I am honored to serve alongside the men and women of the Chandler Police Department, who understand that, in order for us to successfully accomplish our mission, we must have the confidence, support, and respect of the people who visit, live, and work in our city." How does the Chandler PD maintain the confidence of it's community when it's officers lose their cool and bully local church members?

Tonight, as AZ visitors, my friends Debbie and McKenzie are in jail on false accusations and police incompetency. It's ridiculous! Their friends are livid, and we are NOT without a cause.


In his blog post, “Questions about our Graduates,” Paul Chappell, president of West Coast Baptist College in Lancaster, California, is on the defensive about my recent comments about West Coast graduate, Pastor John Guy. In his post, Chappell gives us even more negative examples of West Coasts graduates, but for his positive examples, he conveniently points us to the most isolated graduates possible—a missionary to a tribe in Nicaragua with no phone service or electricity, a tiny church in “rural Kansas,” and another guy in Siberia that we have no way of observing.

Paul Chappell probably wouldn’t feel the need to write this piece if it were just me and others in our movement speaking out against Bible college. Lots of old-style IFB churches all over America have been training preachers in-house instead of sending them off to Bible college, and it has been this way for quite some time. A lot of great pastors came out of Hyles-Anderson College in its heyday when Brother Hyles was still alive, but most of us are not impressed with the fruit coming from today’s Bible colleges. The Bible college model was unbiblical to begin with, and the Bible college era is going the way of the dinosaur. Today, Baptist popes like Paul Chappell are having to work harder than ever to recruit new students for their colleges. “Youth conferences” are often nothing more than infomercials for Bible college, and a lot of IFB’s are choosing not to participate in these embarrassing three-ring circuses.

People in the new IFB movement are not Paul Chappell’s target audience. We aren’t the ones with "questions about his graduates." We already know what they are! I guarantee you there are mainstream IFB pastors out there contacting Paul Chappell and saying things like, “I don’t like Steven Anderson, but this Pastor Polka Dot coming out of your college looks like he has lace on his underwear!” Let’s face it, most IFB pastors are manly men who are disgusted with modern neo-evangelical style churches. I’m against all Bible college in general, but West Coast grads in particular tend to come out super liberal and in many cases, effeminate.

Young ladies who go to Bible college for their “MRS. degree” often end up marrying a weak and watered down pastor or worse--an unsaved false teacher. Another travesty is that single women who are unable or unwilling to go off to Bible college often have a hard time finding people to date in their local church. I’ve even heard of young pastor’s sons urging young ladies in the church to attend Bible college so that they will be “allowed” to date them. This is ludicrous! Why wouldn’t a pastor want his adult son to date a saved girl he met at his own church!?

If you desire to be a pastor, find a church that you agree with on the important things, and then let your pastor train you and send you out. If he has a preaching class or an in-house Bible institute, then take advantage of those classes, but even if he doesn’t, he should be willing to simply mentor you as you study the Bible for yourself while serving in the local church. If you are a pastor who is reading this, stop sending your best young people off to be corrupted or effeminized in schools like West Coast Baptist College and train them yourself.

“And the things that thou hast heard of me among many witnesses, the same commit thou to faithful men, who shall be able to teach others also.”--2 Timothy 2:2

Click here to listen to my sermon rebuking Pastor Polka Dot
Posted by sanderson1611 at 11:27 AM 4 comments: 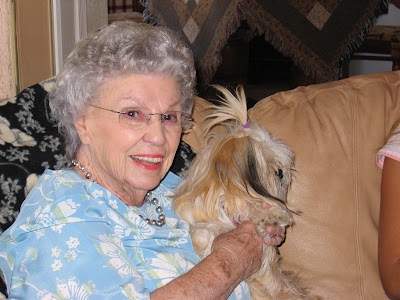 My grandma, Helen Anderson, who was my Dad’s mom, passed away recently at the age of 96, and we held her memorial service here at Faithful Word Baptist Church. My dad, my brother, my older sister, and I all got up and shared fond memories about our Grandma who was a godly Christian lady. We also talked a little about my grandpa, who passed away 25 years earlier. It was great spending time over the weekend with my dad, all three of my siblings, and their families.


In a way, Grandma got to speak at her own funeral because I showed some footage of her from a few years ago. I then preached a sermon entitled “Precious in the Sight of the Lord is the Death of his Saints” as a tribute to my grandparents. The sermon was about how it is biblical to honor those who have contributed to us spiritually. In my sermon, I also hit on some issues my grandparents were passionate about. Grandpa hated Calvinism and tried to warn his whole family against it. My dad definitely got the message, and he passed that hatred of Calvinism down to us. Hopefully, my aunts and cousins who weren’t at the service were watching online and reminded of one of the important doctrines my grandpa taught us and the fact that he left behind letters he had written to his descendants about it.


If you knew my Grandma, you would understand that it was only fitting to have hard preaching as part of her memorial service. Grandpa was definitely a contender of the faith, and Grandma was the woman behind the man. Grandma stuck by her husband through the hard times and played a pivotal role in his salvation. Because of her prayers and faithfulness, my Grandpa and my Dad were eventually led to the Lord by an independent fundamental Baptist pastor.

Likewise, ye wives, be in subjection to your own husbands; that, if any obey not the word, they also may without the word be won by the conversation of the wives; 1 Peter 3:1 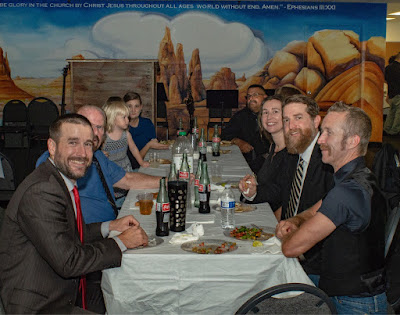 I’ve been blessed with a godly heritage, so it was a privilege to put on a memorial service in honor of a virtuous woman who has contributed so much spiritually to our family. Not only was Grandma a great Christian and soul winner, but she was a fun grandma that we loved dearly, and we had a great time reminiscing about her. We had Mexican food catered in after the service since Grandma loved Mexican food. 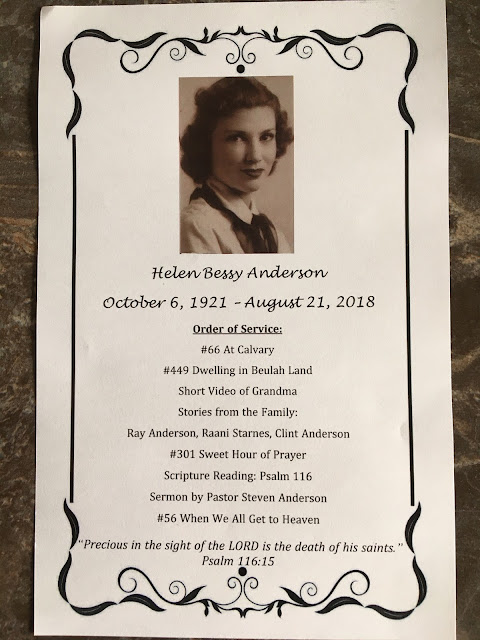 Click here to watch Grandma Helen Anderson’s Memorial Service if you haven’t seen it yet.
Posted by sanderson1611 at 9:37 AM 2 comments: