Sunday morning I woke up at 3am, but Zsuzsa "slept in" until 5am. The reason for the difference was that I had taken a little nap the day before while she drove us to Iao Valley State Park. I used the 2 hours alone to catch up on some Bible memorization. I was mainly finishing up memorizing Daniel chapter 1. When Zsuzsa woke up, we had breakfast at the house consisting of eggs, toast, and prosciutto. At 8:15am, we headed out for church at Grace Independent Baptist Church in Lahaina.

We showed up for the 9:30am "Family Bible Hour," and the lesson was on Daniel 2, which I had just been studying that morning! We stayed for the morning service at 10:30am and heard a sermon on Acts 13:1-3 about the importance of the local church sending out pastors and missionaries. Then after the service there was a potluck, which I must say was the best church potluck I have ever eaten! Some of the highlights were the ham, quinoa salad, chicken fettuccine alfredo, potatoes au gratin, and the fried bananas.

After church and potluck, we headed into Lahaina town for a ride on the submarine Atlantis. This involved taking a boat ride out to the submarine, boarding the sub, and then going down 130' below the surface to look at the marine life. We saw lots of tropical fish and two small sharks. After the submarine ride, we walked around Lahaina town to kill time before the evening church service at 6:00pm. While we walked around the town we had some fudge from the Hawaii Fudge Company and some gelato, oh, and also some "Dole Whip." 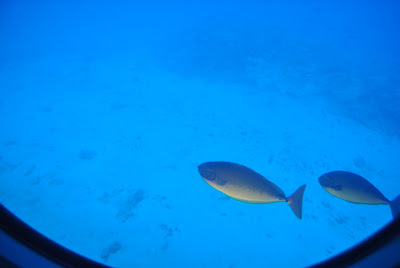 At church Sunday evening, we heard a sermon from 1 Kings 14 and 2 Chronicles 12 about Rehoboam's shields of gold being replaced with shields of brass. We also talked with a few people at the church who had liked our documentary films (New World Order Bible Versions, Marching to Zion, etc). After church, we headed for Round Table Pizza in Lahaina because you just can't go to Maui and not eat a "Maui Zaui" pizza while you're there! Then they messed up our pizza the first time, so we ended up getting 2 pizzas for the price of one! We ate the pizza on the way home and went to bed early so we could be ready to head out early in the morning on the famous "Road to Hana."

On Saturday morning, I was up at 2:50am and hung around the house for a few hours waiting for the sun to come up. For breakfast I had eggs and leftover fried fish, and Zsuzsa had a bowl of Hawaiian granola. The plan for the day was to drive the coast of West Maui and stop and see all the sights along the way. Zsuzsa wanted to stop at a farmer's market on the way there, but when we got there it turned out to be just a grocery store called "Farmer's Market," so we skipped that. In the morning, we went swimming at Napili Beach, which was Zsuzsa's first time ever actually swimming out into the ocean. After about an hour there, we headed for Honolua Bay where we spent a couple hours swimming and snorkeling, looking at the coral reefs and tropical fish there. The visibility wasn't that great on this particular day, but later in the trip we had lots of fantastic snorkeling experiences.


We continued our drive around the West Maui coast and stopped at Nakalele Blowhole. At the roadside stand we bought some homemade chocolate chip cookies and coconut-covered cashews. You can see the blowhole from near the road, but we did the steep hike all the way to the bottom so we could get right near the blowhole...but not too near.


A little down the road from Nakalele Blowhole, the road was closed because of a car accident, so we had to backtrack instead of finishing the whole loop around West Maui. We ended up finishing the drive later in the trip. After the backtrack, we headed to Iao Valley State Park where we walked along the trails and saw the Iao Needle. For dinner we picked up one pound of barbecued pulled pork as a to go order from Fat Daddy's Smokehouse in Kihei. We ate this delicious meat back at the house on sliced bread that we had bought at Costco our first day in Maui. We were in bed by 9pm, and you guessed it, I was up the next morning at 3am again!

Our first morning in Maui, I woke up at 2:59am and was ready and raring to go! I let Zsuzsa "sleep in" until 4:30 am, and then we headed out and started on the winding mountain drive to the 10,000 foot top of Haleakalā crater to watch the sun come up. We made it there exactly 3 minutes before the sun came up (good thing we didn't miss it!). 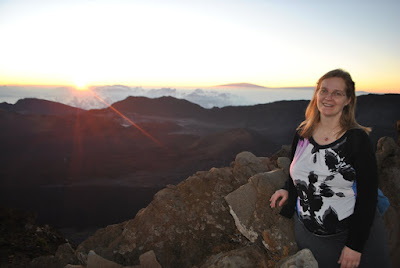 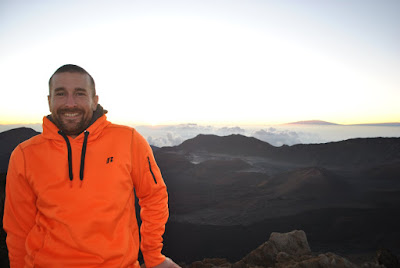 After exploring the top of the crater for a while and taking in all the views, we headed for breakfast at the Kula Bistro, where Zsuzsa had the Eggs Benedict with a buttermilk pancake, and I had the Shrimp and Crab Frittata. We also grabbed a "to go" personal size Macadamia Cream Pie to munch on later. Then we headed for Baldwin Beach on the north shore of Maui for a dip in the ocean. We were there for about an hour before it was time to head for the heliport in Kahului for a helicopter tour of West Maui and the island of Molokai.

After the 1 hour helicopter ride, which was a really cool experience since neither of us had ever been in a helicopter, we headed back to Kahului to hit up the Savers thrift store to get some t-shirts. I purposely didn't pack a lot of shirts because I wanted to get some shirts in Maui as souvenirs. I figured that the thrift store in Maui would have a lot of Hawaii/Maui shirts, and I was right! Why pay $15-$20 for souvenir t-shirts when I could get them at the thrift store for $5 or less each!

After that, Zsuzsa wanted to get a pedicure and her toe nails painted, so I dropped her off at Happy Nails in Kihei, and I went for a run. After a few miles of running, I was pretty hot so I decided to hop in the ocean for a swim. I went way out in the water, but I noticed that it was still shallow enough for me to stand up. Then as I was walking along in the water, I felt a sharp stabbing pain in my right foot that felt exactly like stepping on a cactus. I quickly swam to the shore, and when I could look at my foot, I saw that it was filled with bluish black needles. I had stepped on a sea urchin!

I could barely get any of the needles out so I hobbled back to the nail salon where my wife was getting her feet done, and I asked the Asian lady who ran the place, "So, do you guys remove sea urchin needles?" The slogan on their website is "You name it, we do it," and it turns out, that was really true! She sent me to the grocery store to go buy some white vinegar, which she warmed up and soaked my foot in. Then she spent an hour removing needles with scissors, tweezers, and a razor blade! (See video below) She was able to get about half of them out, and the other half were slowly absorbed by my body over the course of the vacation. I was able to walk and swim normally right away, but I had to lay off the running for about 3 days.


After Zsuzsa's pedicure and my sea urchin debacle, we headed for dinner at Coconut's Fish House. We took our fish and chips to go and ate it at the Kamaole Beach Park. The food was awesome, and it turns out, they have a location in Scottsdale, Arizona, also! Since I'd been up since 3am, and was still on Arizona time, I was in bed by 8:15pm. Then the next morning at 2:50am, I was out of bed and ready to go again!
Posted by sanderson1611 at 5:00 AM 3 comments:

Last month our church celebrated its 10 year anniversary, and as a surprise for my wife and me, lots of people within our church and from all over the world chipped in to provide us with a 10-day vacation to Maui. We are both very thankful since there is no way we would have been able to take a vacation like this on our own. This was also very special for us since it was our first vacation WITHOUT THE KIDS in 15 years of marriage! When you have 8 kids, you will understand the significance of this (Thanks, mom, for watching the kids!). It was also by far the grandest vacation I've ever been on in my life.


Another thing that made this vacation possible was the fact that there is a large house in Kihei, Maui, known as the Brewster Rest Haven, that is designed as a place for pastors to stay on vacation for a super low cost. We were able to stay there for the entire week and a half for a total of only $200 per person. The accommodations were very nice and included a fully furnished kitchen. Not only that, but the lodging also provided lots of things to use while on vacation (snorkels, face masks, fins, boogie boards, water shoes, ice chests, binoculars, etc.).


This series of 10 blog posts will give a day-by-day rundown of our vacation and include lots of pictures we took on the trip.


The first day we arrived late in the afternoon at the end of a 6 1/2 hour flight, so the short time we had in Hawaii that day was mainly just spent getting settled in, buying things we needed at the store, etc. Our first meal on Maui was dinner at a really good restaurant called "Da Kitchen." I had the Terriyaki Burger and Zsuzsa had the Tempura Mahi. The portions were huge and the food was amazing. 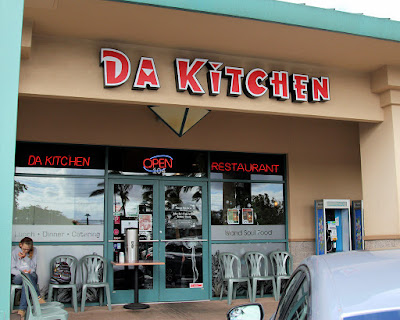 We went to bed early because we were still on Arizona time (Hawaii is 3 hours earlier), and at 3:00am the next morning, I was up and ready to go on our first activity: watching the sunrise from the top of the 10,000' high Haleakalā crater!