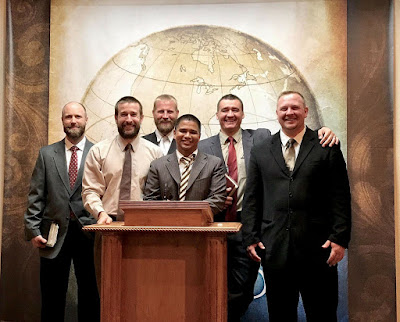 The movie theater was packed out for the Babylon USA showing in Sacramento on Friday morning, and my son Solomon and I enjoyed the time of fellowship with family and friends. Pastor Roger Jimenez preached a sermon before the film where he gave us some grave warnings about the way the next generation is being raised.

Since I wasn’t preaching the second night of the conference, I got to sit back and really enjoy the service. The place was packed out again with over 300 people. One of the songs sung in the service was “Holy, Holy, Holy,” which we enjoyed belting out in light of the recent attacks on the trinity.

The first speaker at the evening service was Brother Graham of Verity Baptist Church. Brother Graham strongly urged people to commute to a good church. He made a great point about the fact that driving an hour or two to church in an air-conditioned car isn’t much to ask considering the fact that Jesus died for us.

Next, Pastor Joe Major of Faith Baptist Church in Violet, Louisiana, preached a powerful, spirit-filled sermon where he encouraged us to “Be Numbered with Those Who go to War.” His sermon was on fire and is a must listen! I especially appreciated his emphasis on loyalty to the man of God, considering what I have gone through recently with heretics trying to split our church.

After such an intense sermon, Pastor Donnie Romero was the comic relief. He had us in stitches several times, but that did not take away from the gravity of his sermon. He preached on the valley of the dry bones in Ezekiel 37. He talked about how we don’t know exactly when or why those people died, just like we aren’t sure exactly when some of the old IFB churches died. He ripped on the old movement but left us feeling hopeful that some of the dead IFB churches will be revived in the next generation. It was an all around great sermon!

Raising the next generation for the Lord, moving or commuting to get in a good church, and the problems with the old IFB movement seem to be underlying themes of the conference so far. Brother Major is a dynamic speaker and was a great addition to the conference this year. If you missed it, you can hear him preach again in Fort Worth, Texas, on August 6th at Stedfast Baptist Church.

Click here to watch the second night of the conference on Youtube.
Posted by sanderson1611 at 8:38 AM