Behind the Scenes of Live TV Interview 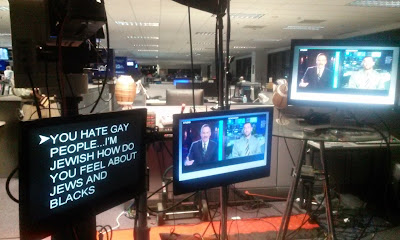 Many of you probably saw this interview a while back, and I have been meaning to post these behind-the-scenes photos taken by a buddy of mine who was with me that day. As you can see, the interviewer was reading his questions from a teleprompter. Either the questions were planned ahead of time, or there was a Cyrano de Bergerac character in another room feeding the interviewer ideas. Even with the advantage of a teleprompter, the questions were a joke—just the typical race baiting that one would expect from the mainstream media. 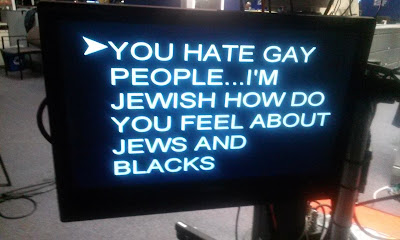 I find it offensive when people compare certain ethnicities to vile reprobates. Our society has become so perverse that they often list race right next to “sexual orientation” as if the homos were just another minority group. As Christians, we should not discriminate against any “race” or ethnicity. In fact, I don’t even believe in the Darwinian concept of race. God divided people by language and religion but never skin color. In this sermon on Interracial Marriage, I prove that we are ALL descendants of Shem, Ham, and Japheth.

“And hath made of one blood all nations of men for to dwell on all the face of the earth, and hath determined the times before appointed, and the bounds of their habitation;” Acts 17:26

“For there is no difference between the Jew and the Greek: for the same Lord over all is rich unto all that call upon him.” Romans 10:12 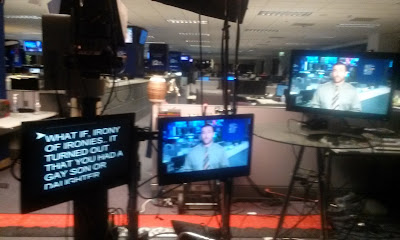 If you listen to the interview, you can see why this guy needed the prompts. I mean, who says “THOUT shalt not?” or calls the Taliban, the “TaliBAND?” And I guess I was supposed to be surprised that an unbelieving Jew worked for a TV station. Shocker!

The guy seemed surprised that I was totally fine with being called a religious zealot. Here are a few verses on zeal, which is a good thing:

“For he put on righteousness as a breastplate, and an helmet of salvation upon his head; and he put on the garments of vengeance [for] clothing, and was clad with zeal as a cloke.” Isaiah 59:17

“Who gave himself for us, that he might redeem us from all iniquity, and purify unto himself a peculiar people, zealous of good works.” Titus 2:14

“As many as I love, I rebuke and chasten: be zealous therefore, and repent.” Revelation 3:19

Here is a link to the full interview 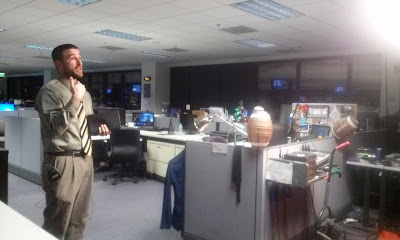 This makes this interview ALL THE MORE AWESOME.

I have to tell you i went looking for your online sermons after you told that interviewer coolly,"well in a religious zealot" when he clearly expected you to go on the defensive.

It was a life changer for me.

For a start one is a BEHAVIOR the other is a skin color. You are BORN black. It has nothing to do with being a sodomite which is not an identity in and of itself.

In fact in many forms of employment eg. Upper echelons of Hollywood, gay men are overrepresented if anything.

This gay rights stuff is a joke.

It's obviously just a way to remove rights from christians to openly practise in the same way that "terrorism" was used to justify nsa spying on us.


It's offensive to black people! These sodomites are riding on the coattails of the black pioneers.

What next?! A civil right to be an adulterer? Well that's just a behavior as well so why not?

This interview is one of my children's favorites, along with the South African radio interview.

Perhaps it's because the Darwinian "race theory" has become widely accepted that the sodomites find cover as a fake minority. In the South African interview, you called out the host on it to my great satisfaction.

You'll find in your SA research that the Darwinian race theory has be amalgamated with Calvinist doctrine among the Afrikaners, making for an incendiary mix. On the other hand, the Africans believe that their evils will disappear when the "oppressive" whites are annihilated, but we see clearly what that kind of "race theory" has done to Zimbabwe (aka Rhodesia).

You talked about the Gospel having been preached long ago in Mongolia, but the Khans and their subjects rejected it. It must have been the same in Africa from the days of the Ethiopian eunuch that was saved by Philip. I hope that your visit will cause the scales to fall of the eyes of all Southern Africans to realize that we are all of one blood and that the so called darkness of Africa is from rejecting the Gospel, not because of "race theory".

I'm praying for you all and keep up the good work especially the soul winning.

I know you've preached tons about the reprobates especially recently bylut i thought this one minute video would not only disgust you but also would give you further evidence of the vile nature of these disgusting abusers of the flesh.


Notice how Fry a homosexual himself just laughs. I showed my female work colleague who has homosexual friends and she was mortified and i felt like throwing up yet all Fry could do is laugh.
https://youtu.be/5Kl-kDJ2Qh4

Brilliant interview by a Christian who knows what he believes and knows the Word of God better than most Christians. I just have one question: Can a homo-sexual be saved after God gives him up? I have seen a video of a gay guy that was saved or at least he said he was saved.

Pastor Anderson I really appreciate you continuing to repeat what you do about races of people, not believing in it, that we are all one humanity in that way - because I am surrounded by a lot of comments constantly against a particular race of people and I really don't want my own thoughts to ever fall into that.
Lord bless you!

I love that interview! Pastor Anderson, you handled yourself beautifully, and made it clear what God's word says. I only wish I could've seen the entire interview. I looked at their site, but couldn't find it. God bless you and your ministry, and may you be able to continue teaching God's word for many years to come!

I watched the clip. It was repulsive. I felt sick and the comments were depraved also.

Fry was feigning surprise. I'm sure he knows all about this stuff. He is a consummate degenerate.


This is clearly mentally ill.