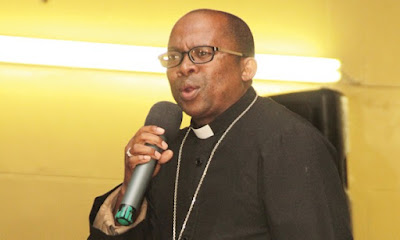 “Beware of the scribes, which desire to walk in long robes, and love greetings in the markets, and the highest seats in the synagogues, and the chief rooms at feasts; Which devour widows' houses, and for a shew make long prayers: the same shall receive greater damnation.” Luke 20:46-47

Reverend Thabo Mampane, who was interviewed with me on a radio show while I was in Botswana, bragged about his master’s degree in theology and other earthly accolades and how he seeks the approval of other religious leaders to make sure he is “relevant” in today’s society.

He tried to defend the practice of sprinkling by saying we don’t have enough water to baptize people nowadays. Ironically, one of the first things I noticed as a guest in that country is that the people routinely shower twice a day! It’s not that they’re short on water—they’re short on truth.

Last time I checked, seventy percent of the earth’s surface is water. People don’t live in places where they do not have access to any water, so it’s a stupid argument anyway. If someone lived somewhere where water was scarce, we would take that person to a place that had more water, baptize them, and send them home.

“And John also was baptizing in Aenon near to Salim, because there was much water there: and they came, and were baptized.” John 3:23

If you were baptized by sprinkling or pouring, that is not baptism. Baptism is being dunked under water because it symbolizes the burial and resurrection.

“Therefore we are buried with him by baptism into death: that like as Christ was raised up from the dead by the glory of the Father, even so we also should walk in newness of life.” Romans 6:4

“And he commanded the chariot to stand still: and they went down both into the water, both Philip and the eunuch; and he baptized him.” Acts 8:38

Not only is Thabo Mampane wrong on baptism, but this guy embodies the worst trends in modern Christianity. He believes much of the Bible is outdated, and he is not saved. When a guy from our church ran into Mampane and asked him “the question,” he admitted to not knowing if he was on his way to heaven. It is no surprise that this watered-down liberal is revered by the masses as one of the spiritual leaders of his country.

Here you can pay to watch all footage from "Deported" including WATCHING the full radio interview from the perspective of being in the studio with us including off-air interactions during commercial breaks.
Posted by sanderson1611 at 11:18 AM

Email ThisBlogThis!Share to TwitterShare to FacebookShare to Pinterest
Labels: Botswana

Amen. I guess one could say that Bible colleges are the pathway to Hell; since this fellow has his wonderful theology degree but doesn't even know how to go to Heaven - then how can he lead a church??!! He needs to quit his job and find another career.

Elsewhere in Southern Africa, I knew of people who went to Bible college and it turned them into Atheists - I knew a man personally who was a "qualified" Pastor, theology degree and all, and yet he didn't even know there were different Bible versions. (he also told me Catholics are Christians too as they believe in Jesus). A few years ago I went to look at a theology school here in South Africa; loads of books to read and study, not as many Bibles though and I don't remember them even being KJV. But even so, they would have been Scofields anyway, right?

And, though I know there are liars all over the world, but I get the idea that Africa in particular is cursed with lying false prophets. Like, where are there any real churches in this forsaken place?! Plenty people who want the cut-out yoghurt carton around their necks, who want the respect of the world, but nobody who actually has any Gospel in them, let alone any teachings from the Bible.

Praise God for brother Garrett, and thanks for at least trying to reach Southern Africa - the governments of Satan may have barred you (courtesy of the USA which sought to destabilise SA and Botswana as you well know) but rest assured, they cannot stop the flash drives, the DVDs and the believers who do share your sermons and of course the Gospel.

Africa is no different from other continents in that there are no KJV-founded churches there. South America, Asia and the Middle East are that way too.

There is a special mention for Africa in the Bible, which is encapsulated in Acts 8. It is the most significant record of how the gospel came to Africa. Many people are mistaken that the Bible first came with the missionaries that entered the continent during the so called Scramble for Africa in the 19th Century (or in South Africa's case in the 17th Century with the first Cape landings of the Dutch East India Company). They are wrong. It is the Ethiopian eunuch who first brought the gospel back to Africa according to the Bible.

I think -- purely speculating here, of course -- that the eunuch's caravan arrived back at Candace's court in the Ethiopian capitol (where King Solomon had probably been centuries earlier and could explain why by tradition the eunuch was returning from a pilgrimage in Jerusalem) and, with the whole court and assembly of the queen gathered there, he told them what Philip had told him about Jesus, how Philip then baptized him after his conversion and how the Holy Ghost had caught up Philip from his chariot and caused him to "disappear before his eyes." The court in rapt attention probably thought that his fantastical tale was as a result of some fever or madness suffered during Mediterranean crossing at Egypt and the subsequent hard journey down the Nile to the queen's capitol. The queen and some of her courtiers might have felt dread that her treasurer, now turned heretick, was a threat to the political order (just as President Ian Khama would 2,000 years later when Pastor Anderson and his band of "dangerous missionaries" arrived and began soulwinning in Botswana).

Two things might then have happened. Candace, realizing the divine power of the book that the eunuch was carrying with him back from Jerusalem, may have sought to co-opt the radical gospel teaching into her pagan religion (like Constantine did much later in Rome in 313AD), in which case corruptions of Christianity such as the Ethiopian and Egyptian Coptics survive from that mongrelization to this day. On the other hand, she might have ordered the eunuch's public execution as an exemplar for the trumped up charge of "fiddling in magick and sorcery." Either way, "Africa" rejected the early advent of the gospel just as John 3:19 - 20 (KJV) says.

It is written about Pentecost that everyone gathered there heard the gospel preached in their own tongue and thereby it reached the ends of the world. There are no Africans specifically identified in the audience, but there must have been at least some from regions in Africa other than Ethiopia because we know that high-ranking Africans like Candace's eunuch traveled to Jerusalem for religious purposes. I imagine they too returned to their capitols same as the eunuch did. With 20/20 hindsight, it seems most might have been put to death for "turning their kingdoms upside down" with the gospel.

The eunuch reading Isaiah in the chariot tells us that Africa must have had some learned and intellectual civilizations that were advanced as a result of adoption and practice of the Old Testament law. However, after rejecting the New Testament (as I'm guessing the Ethiopians and other African kingdoms probably did subsequent to Pentecost), Africa might have gone into its own Dark Ages (like Europe did when the Catholic church dominated there and the gospel was almost snuffed out). After all, liberty does abide where the Spirit of God dwells (2 Corinthians 3:17, KJV), so when Africans refused Jesus, bondage took over. Perhaps that might explain the erased histories, ruined cities, slave trade, European colonization, post-independence despotism, civil wars, droughts and pestilences that hold Africa down right now and make it appear to be "particularly cursed" and "forsaken."

And it seems that Africa still hasn't learned the lesson, perhaps because this lesson is obscure like I have described. With the post-independence advent of FWBC and other KJV-founded churches and missions, God has given Africa another chance to receive and accept the pure unadulterated KJV gospel in a third wave of evangelization (the first being after Pentecost and the second being with the European colonists). The people and governments of Africa are in danger of reprobation if they continue to kick out men of God like Pastor Anderson and Brother Kirchway; if they keep shutting down gofundme mission campaigns, if they keep listening to long-clothed false prophets like Reverend Mampane and Desmond Tutu; if they keep on shutting down soulwinning. But, lo, there is a remnant in Africa even, so all hope is not lost if we can find those 7,000 in various African countries that have not yet bowed their knees to Baal. FWBC Botswana and Malawi are clearly showing us that the continent is white unto harvest.

I wouldn't say Africa has never had a KJV-founded church; there are churches which do use it. Years ago I went to a Pentecostal church which was KJV only; and there is an entire cult in Southern Africa called the Old Apostolic Church which is KJV-only when in English.

I think there's a lot more at play than we know about. For example the influence of Zionism in Southern Africa "high up" in companies, politics - also the Freemasons. For example if you check the South African Bible Society, its new logo has the Freemason symbol incorporated and its founder was a Freemason. I've seen places in South Africa where there is blatant Freemasonry "hidden in plain sight". That would have come with the British in the 1800s (UK annexed the Cape in 1818, SA Bible Society was started in 1820).

Or cultural reasons - Sub-Saharan Africa has a general culture where it blindly respects people in authority and this includes Pastors; so you can literally call yourself a Pastor and start a false church, and people will respect you - even if they completely hate what you're saying, they'll still call you a man of God (see the scope for rampant abuse?).

And don't forget racial reasons, since (at least in SA and Zimbabwe) the previous and current regimes thrive on fuelling racial hatred - plenty people reject Jesus because they know the "white hippie" picture and they won't worship a white man. But there are "mostly black" false churches, there is the "traditionally African" ZCC satanic church, there is Islam which targets black people by claiming both Muslims and blacks are repressed and therefore have a common struggle...

But the SA/Botswana debacle was just horrible. Even "Christians" in SA threw FWBC under the bus just because he raised a few of SA's evils in a sermon. They clearly care more about their stupid rugby and barbeques than about their nation being so evil, you can almost guaranteed get away with rape.

Luckily Desmond Tutu is out of the picture, he is old and retired and only comes out every now and then to make stupid statements. There aren't really any vocal, visible religious leaders - just loads of fake preachers, some recognisable from TV and some not.