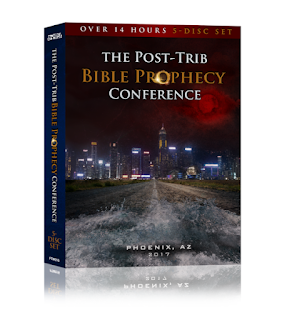 People ask me all the time why I think it’s so important not to be fooled by the pre-tribulation rapture. Sometimes they don’t even understand why I focus on this issue at all. First of all, the reason it’s important to stand on the post-trib rapture is because it’s the truth, and the other teaching is a lie.

“Let no man deceive you by any means: for that day shall not come, except there come a falling away first, and that man of sin be revealed, the son of perdition; Who opposeth and exalteth himself above all that is called God, or that is worshipped; so that he as God sitteth in the temple of God, shewing himself that he is God.” 2 Thessalonians 2:3-4

Some pre-tribbers will even come at me asking what us “posties” are doing to prepare. They’ll mock us by asking if we are stockpiling food or something. What they apparently don’t understand is that just knowing that the tribulation is coming is beneficial even if you don’t have any food, water, or ammo. Being ready for it mentally is going to be a huge advantage because the Bible talks about people being offended during that time.

If someone were planning to jump me the moment I walked out the door of my house, even if I didn’t have something to use as a weapon, just knowing it was coming would be an advantage. It is always better to be prepared and know what’s coming.

When it comes to the question of doomsday prepping, I’m not really dogmatic about it one way or the other. I don’t think it’s wrong to be ready for hard times with some basic food and supplies, but I think some people can get carried away with it. The Bible makes it clear that we aren’t supposed to fear what people are going to do to us or worry about what we are going to eat in the future, but there are also verses about forseeing the evil and preparing yourself. Maybe you don’t believe in prepping at all, and that’s fine too. There’s a case for both sides, but focusing on whether or not we are physically prepared for the tribulation is missing the point because the important thing is that we are prepared spiritually.

In order to properly grasp end-times prophecy, you have to understand that the rapture is not coming before the tribulation, but after. I've talked to a lot of people who have told me that before they realized the rapture was going to be after the tribulation, they didn’t enjoy reading from Revelation. It never made much sense to them because they had been taught the pre-trib position. God wants his children to read and understand his Word, which is why preaching the truth about this subject is vital.

“Blessed is he that readeth, and they that hear the words of this prophecy, and keep those things which are written therein: for the time is at hand.” Revelation 1:3

Here is a short video on my attitude toward staying for the tribulation
Posted by sanderson1611 at 11:51 AM

Email ThisBlogThis!Share to TwitterShare to FacebookShare to Pinterest
Labels: After the Tribulation, rapture

Zion’s Fire seems to be mid trib. The scripture that says we will not be able to withstand it.