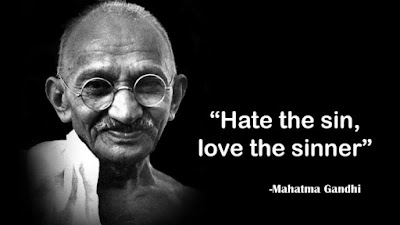 "I'd be a Christian, if it were not for Christians" Gandhi

I am sick and tired of Christians repeating the mantra, “Hate the sin, love the sinner,” as if it were in the Bible or something. This saying is actually a Mahatma Gandhi quote, and Gandhi was not the hero you think he was. Stop quoting this hypocrite, false teacher, and pervert who is burning in Hell!

“An eye for an eye makes the whole world blind.” Gandhi

Gandhi preached non-violence; however, like many politicians, he was a hypocrite. In fact, this self-proclaimed pacifist wrote a leaflet during World War 1 entitled, “An Appeal for Enlistment.” Later, in World War 2, he offered “non-violent moral support” to the British. Although Gandhi could never hurt a fly, he encouraged others to fight in wars, which was in opposition to his non-violent principles.

"It is an arrogant assumption to say that human beings are lords and masters of the lower creations.” Gandhi

Gandhi, like many Hindus, was a vegetarian and taught that it was a crime to eat meat, which he disdainfully referred to as carcasses. He was against eating animal products and went on an extreme “fruitarian” diet for five years, causing him to suffer from pleurisy. When his doctor told him he couldn’t live off of fruit, he reluctantly started drinking goat’s milk.

Gandhi taught that other than during efforts at procreation, celibacy in married couples was the superior state. Gandhi took a vow of celibacy later in his marriage, discontinuing physical relations with his own wife. He was instead frequently accompanied by naked young women in his bed, which he claimed was a “test.” His writings, which contained the sordid details of these encounters were suppressed for several years after his death.

Stop quoting Gandhi, a Hindu/Buddhist fraud, and make the Bible your authority.

“Now the Spirit speaketh expressly, that in the latter times some shall depart from the faith, giving heed to seducing spirits, and doctrines of devils; Speaking lies in hypocrisy; having their conscience seared with a hot iron; Forbidding to marry, and commanding to abstain from meats, which God hath created to be received with thanksgiving of them which believe and know the truth. For every creature of God is good, and nothing to be refused, if it be received with thanksgiving:” 1 Timothy 4:1-4

“And God said, Let us make man in our image, after our likeness: and let them have dominion over the fish of the sea, and over the fowl of the air, and over the cattle, and over all the earth, and over every creeping thing that creepeth upon the earth.” Genesis 1:26

Here is a sermon on Hypocrisy that talks about Gandhi
Posted by sanderson1611 at 8:26 AM

Everyone I tell that a pastor is required to be married, gives the excuse that "well Paul said it's better not to marry if you can handle it". While I see unmarried Baptist pastors dating women, or divorced pastors. And these people justify it based on Pauls one-liner, or that "Paul wasn't married" How can we get it through to these people?

First you proof that Paul was not a pastor, he was what we call missionaries (the biblical term is evangelist). I'm assuming the people you are talking to about pastors needing to be married are not pastors, then if they're saved then maybe they're just babes and need time to grow. I suggest patience with them, but don't usurp authority over the pastor. Probably the best way would ask a qualified pastor to explain to them the requirements.

If they're unsaved then first and foremost give them the gospel. From there the Holy Ghost will guide them into all truth as Jesus promised.

But any pastor worth their salt believes that bible to be the end all, be all for all matters in faith and practice. If they refuse to hearken to a clear statement saying that pastors must be the husband of one wife at best they are backslid pastors - If they're using anything to justify divorce I believe they shouldn't be a pastor anymore (and definitely shouldn't be if they're remarried to someone else) - and at worst they're unsaved false prophets.

I hear so much about Ghandi!

"You christians are so unlike your Christ" -- way to TOTALLY MISS THE POINT.

This is oft quoted by young atheists who are too stupid to have actually seen read the gospels and think about it.