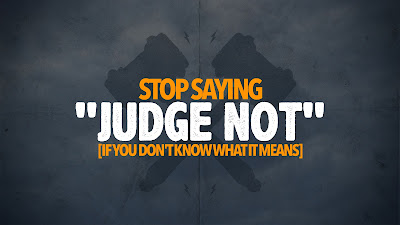 Judge not! Judge not! People keep repeating that as some kind of mantra, but it just doesn’t make sense. Today’s watered-down Christianity that teaches we should never judge anyone is not logical and is a perversion of scripture.

I’m offended by your name, your honor. You’re a “judge,” and the Bible says, “Judge not.” Or perhaps next time I reprimand my two-year-old, he should respond with, “Only God can judge me.”

The Bible doesn’t teach that we should never judge, but people often take Matthew 7:1 out of context. They ignore the next few verses and what the passage is actually saying:

“Judge not, that ye be not judged. For with what judgment ye judge, ye shall be judged: and with what measure ye mete, it shall be measured to you again. And why beholdest thou the mote that is in thy brother's eye, but considerest not the beam that is in thine own eye? Or how wilt thou say to thy brother, Let me pull out the mote out of thine eye; and, behold, a beam is in thine own eye? Thou hypocrite, first cast out the beam out of thine own eye; and then shalt thou see clearly to cast out the mote out of thy brother's eye.” Matthew 7:1-5

Notice it doesn’t say to leave the mote in your brother’s eye. What the passage is saying is to make sure you aren’t a hypocrite and take care of your own problem first. It’s like when you’re on an airplane and the flight attendant does that safety demonstration. They tell you to put the oxygen mask on yourself first, and then you can help someone else.

We shouldn’t have a holier-than-thou attitude, but do you know what it means to judge? It means to make a decision—to have an opinion. What about the homos? “Who am I to judge?” What about rape, murder, pillaging? “No opinion. Only God can judge.” Do you realize how ridiculous that sounds!?

Ironically, when people tell us we are judgmental for preaching against certain sins or certain people, they are, in effect, judging us. Somehow it is okay for them to tell us that they feel that we are doing something wrong, yet they don’t think we should make judgments based on what GOD says is wrong.

“Judge not according to the appearance, but judge righteous judgment.” John 7:24

People will try to say that, because you aren’t perfect, you can’t judge anyone. I guess no one can correct their children, speak out against anybody, or preach the Word of God. How would I obey the following verse, which applies to me as a pastor?

“Preach the word; be instant in season, out of season; reprove, rebuke, exhort with all long suffering and doctrine.” 2 Timothy 4:2

When people criticize me for preaching God’s law, it’s not really me that they are disagreeing with. Their problem isn’t with me but rather with the “lawgiver.” People will inevitably play the judge-not card when something in the Bible shines a light on their sin.

Here is a sermon where I go into this subject in more detail.
Posted by sanderson1611 at 5:00 AM

Email ThisBlogThis!Share to TwitterShare to FacebookShare to Pinterest
Labels: judging

Psalms 37:30 The mouth of the righteous speaketh wisdom, and his tongue talketh of judgment.

Psalms 37:28 For the LORD loveth judgment, and forsaketh not his saints; they are preserved for ever: but the seed of the wicked shall be cut off.

I do pray about and try hard not to judge, but it is hard to follow God's word in regard to judgment 100% of the time. For example, in my city, right now, our Mayor and city council members are putting forth a new law that directly affects my neighborhood. I own my home, pay my taxes, etc., yet my property and all city property will become 'free' open space for legal homeless encampments. I can't help but judge the mayor and council on their voting decisions on this.

I volunteer my time with an ecumenical group providing hot comfort food meals to the many homeless teens in our city. Preparing the meals, serving, sitting and eating with them, soul winning, family unification if at all possible. Befriending these teens with the light of God. However, I don't necessarily want a group of them camping in my front or back yard. Judgment does come into play and I pray for forgiveness.

Here is a great sermon by Pastor Dave Berzins on this very subject.

Very well stated and thoughtful. This type of thinking has helped me in conflict resolution.

It's stupid to stop at "judge not".
Really stupid. Because the sentance is "judge not lest ye be judged" which obviously means don't be a hypocrit. But people are very shallow these days in their knowledge. Jesus would definately not have been chilling in a gay bar --- as i have heard some claim. SMH