New Video Review of Born that way After All! 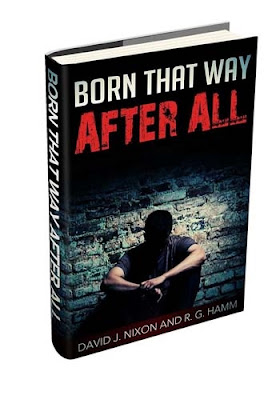 When I first heard about Born that Way Ministries and preached against it, I had not yet read their perverted book, "Born that Way after All." I didn’t see the need to since there were articles on their website that confirmed the premise of the book, which is a false doctrine about eunuchs. Since everyone kept throwing in my face the fact that I hadn’t read the book, I finally bit the bullet and read the piece of crap.

Well the book was way worse than I expected. After reading the entire book, I have no doubt in my mind that the agenda of this ministry is to allow Sodomites to infiltrate churches, specifically children’s ministries! The word eunuch is used throughout the book as a code word for a Sodomite, and the book repeatedly teaches that “eunuchs” make great children’s ministry workers. Don't take my word for it - watch the video linked at the end of this post to see it with your own eyes!

The book even condones so-called eunuchs living together and showing affection toward one another—as long as it isn’t too much or too public. I guess we should just take the word of two “former same-sex sex addicts,” who happen to be living together that they are now eunuchs and give them a Sunday School class to teach. This book would be highly offensive to actual eunuchs since it paints eunuchs as flamboyant, cross-dressing queers.

In the section on cross dressing and transgenderism, they don’t even include the one verse in the Bible that says that if you do that, YOU are an abomination. If this is a Christian book and they really think they can fix these people, then why aren’t they teaching them the verse that commands against their sinful behavior?

“The woman shall not wear that which pertaineth unto a man, neither shall a man put on a woman's garment: for all that do so are abomination unto the LORD thy God.” Deuteronomy 22:5

Born that Way After All is true to its title because in one place it allows for the possibility that people might be born with homosexual tendencies because of our sinful nature. I guess they had to throw that in for the homos since the whole eunuch thing might not resonate with someone who is burning in lust for the same gender. This is also a way to get Christians used to the idea that Sodomites are "born that way."

Johnny Nixon and friends must be running scared since they just changed the title of the book! There are now two different titles available, even though they are both the same book. The website explains that the content is identical, so there is no need to buy both books. Maybe the new version, "Why Do Some People Think They are Gay?" will be marketed to the more conservative IFB crowd. Well changing the cover isn’t enough since I have exposed what is inside the book.

Here is the video where I show the actual quotes from the book.
Posted by sanderson1611 at 8:03 PM

Thank you for exposing this garbage!

Keep fighting Pastor Anderson! Many of us are praying for you! May God continue to richly bless and protect you, your family, and congregation!

Johnny Nixon has to be a Sodomite! There is just no other way he came up with this garbage. The sodomites will try anything to get close to the children. Who falls for this crap!? SERIOUSLY! I bet Sam is his butt buddy.

Pastor Anderson, I remember you asked on that video who Johnny Nixon is - that he didn't fit in with the others listed.

The article is horrid but it refers to:
"Dr. Johnny Nixon, pastor of First Love Baptist Church in Doerun, GA"

So there you have it. If you live in Georgia, keep your kids away from First Love Baptist Church!!!

We desperately need some movie recommendations from you, Pastor! Impossible to find anythimg worth reading or watching besides the Bible these days.

"We desperately need some movie recommendations from you, Pastor!" -Anonymous

I second that request. Recommended books would be awesome as well. Thank you for your hard work Pastor Anderson.