Putting the "I" Back in IFB 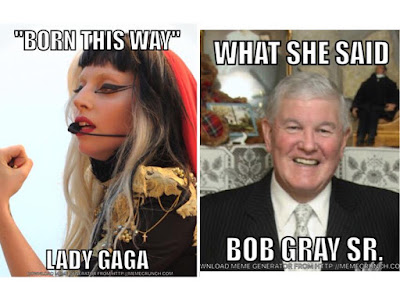 Lately, I've been expressing my disappointment with Bob Gray Sr. as as one of the "leaders" of the IFB movement. This is not to say that the independent fundamental Baptist movement needs new leadership. Independent Baptist churches ought to be independent in every sense of the word. We need to stop elevating fundamental popes like Bob Gray Senior. Yes, we have conferences where we enjoy good preaching and have fellowship with like-minded churches, but without Bible colleges, we treat our pastor friends as equals.

Each pastor is the leader of his own church, and he has the power to send out faithful men who he feels are qualified to pastor their own churches. Churches should beget other churches, but as independent Baptist pastors, we should be careful not to create a new hierarchy. We need to maintain a lateral relationship with other pastors. Missions boards and Bible colleges dictating what is or is not preached in many churches is akin to a denomination.

Here's a start, independent Baptist...Throw away your Bible college notes, and do your own study on end times prophecy. If everyone did that, we’d have a lot more people believing in the post tribulation rapture. Or how about using your own common sense and spiritual discernment to determine what a biblical "eunuch" is and is not?

If you still have doubts about the "eunuch" thing, then visit Johnny Nixon’s facebook page to decide for yourself whether or not he is a separated, fundamental Baptist. Have you considered the source of "Born that Way Ministries" or are you just assuming it’s fine because Bob Gray Sr. supports it?

Everyone is susceptible to peer pressure, which can be both good and bad. That said, Bible college driven hierarchies can become too powerful of an influence. While one leader might make a positive impact, his successor might take things in another direction.

When you make the Bible your authority and let the Holy Spirit guide you, you are a true independent Baptist. If you see something wicked going on in other churches like this “Born that Way” garbage, then speak out against it. Don’t let some Bible college president muzzle you just because he is older and has a large following.

“Preach the word; be instant in season, out of season; reprove, rebuke, exhort with all long suffering and doctrine. For the time will come when they will not endure sound doctrine; but after their own lusts shall they heap to themselves teachers, having itching ears; And they shall turn away their ears from the truth, and shall be turned unto fables.” 2 Timothy 4:2-4

Here is a sermon on why Bible college is unscriptural and wrong.
Posted by sanderson1611 at 2:49 PM

BTW, he's now attacking you on his blog by comparing you to...wait for...wait for it... the liberals attacking president trump. Lol. Here's the quote from his lame blog...

He's really unloading on you Pastor Anderson. I'm sure you're in panic mode now that you've been exposed as a "liberal". Lol!

Some guy: Bob,help! Somebody is opening the door, so to speak, to start letting Sodomites in the church. He's like the dragon giving power to the beast, and this beast has written a filthy decieving book, that would even decieve Fundamental Baptist preachers, if it were possible, twisting and omitting scripture to make the homos into something else, something that Jesus would approve of, what should we do??

Bob: Well we ought to fight this, we're in a spiritual war son, the bible refers to the Sodomites as dogs, we can never let them in the church! Who is this man condoning this heresy and giving power to this "Beast"?

Some guy: Thou art the man.