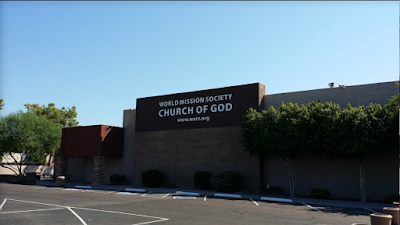 My sister and brother-in-law were recently approached in Walmart by a man carrying an NIV who asked them if they were familiar with the “Church of God.” After they responded that they were Baptists, he proceeded to announce that God is also female and that the Bible talks about a “Heavenly mother.” At first, they thought the female he might be referring to was Mary or maybe even “Shekinah,” but it was something even weirder.

They rebuked his strange doctrine with scripture and schooled him on some other things including the Bible version issue. They tried to give him the gospel throughout the discussion, but he kept going to back to the female God thing. They challenged him to show them that from the Bible, and he took them to Galatians 4:26.

"But Jerusalem which is above is free, which is the mother of us all." - Galatians 4:26

This seemingly intelligent, well-spoken young man actually believed that "Jerusalem" in that verse is God and felt that he had successfully proven that God has a female persona. The guy’s beliefs defied logic, and my brother-in-law even got him to admit that he believed only people who go to his church will go to Heaven—a textbook sign of a cult. The cult member also admitted to believing that Old Testament saints like King David burned in Hell until Jesus visited them after the crucifixion and told them how to get out.

He denied the simple truth of John 3:16, stating that you also have to also keep the Passover and Sabbath to be saved. Admittedly, that part of the discussion was kind of a moot point since the guy believed in a female God, but at least they hit him with several verses in an attempt to get through to him.

Apparently, a couple of verses in Galatians that mention "Jerusalem" are the basis of a cult called World Mission Society Church of God, which was founded by a man in Korea who they believe was the second coming of Jesus Christ! If you’ve ever wondered how Jim-Jones style cults recruit people, apparently, they might approach you while you’re out shopping.

Poor people in third world countries often fall prey to bizarre cult leaders and antichrists, but it’s surprising that a seemingly educated American was worshiping a woman in Korea as God! He said that Jerusalem IS a woman and that she lives in Korea. At one point, he even had the audacity to say that she is God's wife! This already brainwashed person was not interested in hearing the Roman’s Road.

We aren’t the only ones out there proselytizing, so we need to try to reach people before someone else does. Unfortunately, there are gullible people all over the world who might be just as receptive to joining a cult as they would be to getting saved.

“The simple believeth every word: but the prudent man looketh well to his going.” Proverbs 14:15

Here is a video to go along with this story
Posted by sanderson1611 at 7:09 AM

Email ThisBlogThis!Share to TwitterShare to FacebookShare to Pinterest
Labels: cults

Pastor, The same exact thing happened to my wife and I while we were at a supermarket. We were approached by a Korean lady who had an NIV and starting talking to us about this mother god garbage. I tried to give her the gospel but she denied it said that you have to take the lords supper to be saved and do a bunch of other things. What was even weirder is that this lady didnt even look real she look like a doll or something with all her make-up perfectly done she didnt even look human. The whole situation was weird.

Wow! They must teach their members to "evangelize" in retail stores.

And these cults are subtle - they use truths (or perceived truths) to lure people into their web of lies! (Just like Galatians 1:6-10)

Yesterday the Jehovahs False Witnesses visited my home while I was at work, they left their flyer. I don't know whether to be happy I missed them or sad because I've been waiting for years to lay into them :-) Now I just threw their flyer in the trash, but I have read them before and their tactic is to harp on about how BAD the world is, getting worse á la End Times... and then to get the solution, Jesus - via the JW of course. I've heard of Muslims use relating tactics when trying to convert black people, saying they understand racial oppression because their Palestinian brothers are oppressed.

But the really common tactic used by cults, sects and faggots - they deliberately seek out troubled people (unstable souls) who are depressed and lonely, then shower them with affection. It overwhelms the individual completely that they can't handle it, and can't think straight. Then they threaten to withdraw... and the person feels desperate because this is the first time they've felt loved - and they'll do anything to keep it that way. So they join the cult or sect to retain the love and affection of the cult/sect members/leader, or they get groomed into committing sodomy with the fag.

I witnessed exactly this with a relative, who was led in exactly this way into a cult called the Friends of Smith, which today is called the Brunstad Christian Church. They pass themselves off as a non-denom church today but 25 years ago they told their members to have 10,000 members by the end of the world... I also witnessed this with a former friend who got lured to a white supremacist sect compound in South Africa called Jesurun (headed by Pieter L White) and we had to bust her out with the help of the police!

Wow Pastor, my University is CRAWLING with these retards. I've been rebuking them in public for the past 2 years. They're really aggressive on campus. And they literally focus on the exact same points you mentioned: galatians mentioning of Jerusalem, and the passover being necessary for salvation.

It's true Pastor Anderson. You may only believe it is a cult but you missed the other part of the message. They were tryin really to bring salvation to you. I will pray for you my brothers and sisters. Our mission is to preach to the world and then God will come. That's why we are trying to save so many and bring them out of Babylon. Our teachings come from the bible most people ignore the bible as if it is to be taken lightly but it is an actual truth to the message. Our church has been keep hidden until now so we can preach to the world in the last days.

I've been approached several times by members of this "church". As a Christian, I try to be polite and have respect for the beliefs of others, but it made me very uncomfortable to see such obviously misled persons spreading a false gospel. It seems the only evidence they can offer up for what appears to be the foundation of their entire religion is few small, misinterpreted passages. I've read accounts from members online saying how the "church" seeks out "lost souls", solicits money from them, attempts to control their time, and even interferes with their personal relationships. Like keeping them from family and friends who are non-members or trying to have a hand in if/who they marry. Apparently, they wait until you're "in" to spring the whole Korean couple, second coming of Jesus thing on you, too. That's not the strangest part though. What really stood out to me, after meeting 3 sets of members, on 3 separate occasions, was that they all had the same voice and mannerisms. I mean, completely different ethnic backgrounds, but the same exact voice and words. Like robots. Very smiley, touchy, excitable, well coiffed robots. It's quite disturbing, actually, when you head out for groceries and find yourself being scouted by a cult. After the third encounter, I was beginning to question whether there was something about me, personally, that was attracting their attention, so I apologize, but it is a bit comforting to see others have had numerous run-ins with them as well.

Have you ever preached a sermon on these fools?
During the SWMM we had a huge disputation with 15 of these heretics.

I would love to have a few sermons worth of info to show the folks around here.
They pervert Revelation 3:12 to say that the Holy Ghost's new name is Jerusalem, and then claim that the Holy Spirit is their female (g)od.
Blasphemy!


John 3:19-21 King James Version (KJV)
19 And this is the condemnation, that light is come into the world, and men loved darkness rather than light, because their deeds were evil.

20 For every one that doeth evil hateth the light, neither cometh to the light, lest his deeds should be reproved.

21 But he that doeth truth cometh to the light, that his deeds may be made manifest, that they are wrought in God.

You guys are a wicked cult, denying the gospel of Jesus Christ and hiding in the shadows. I ran into some of your folks and none of the 15 would admit what religion they were.

I have to agree with everything you said and it's sad. Unfortunately my sister is caught in their website of liessential and this is truly a cult