Why "Faith Promise" Missions Can be Dangerous 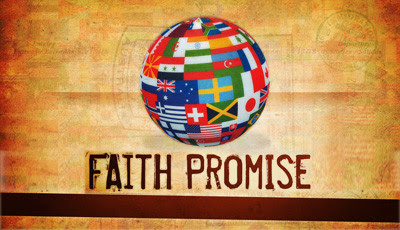 In churches that have “faith promise missions,” they hand out cards, and people pledge to give a certain amount weekly, throughout the year. I’m not against churches that do this, but I don’t personally believe in it because I wouldn’t want someone to invoke the wrath of God when they fail to keep their promise.

People have a tendency to break financial vows even when they make them in church. This used to bother me when I went to a church that had a faith promise missions program. I remember there would be two figures in the bulletin. There was the total promised and the total collected, and those two figures were always different. The promise was always a little higher than what was actually coming in. They would make it sound like getting 75 percent of what was promised was good, but I remember being nervous about it. It always made me think of Ananias and Sapphira.

“But a certain man named Ananias, with Sapphira his wife, sold a possession, And kept back part of the price, his wife also being privy to it, and brought a certain part, and laid it at the apostles' feet. But Peter said, Ananias, why hath Satan filled thine heart to lie to the Holy Ghost, and to keep back part of the price of the land? Whiles it remained, was it not thine own? and after it was sold, was it not in thine own power? why hast thou conceived this thing in thine heart? thou hast not lied unto men, but unto God. And Ananias hearing these words fell down, and gave up the ghost: and great fear came on all them that heard these things. And the young men arose, wound him up, and carried him out, and buried him. And it was about the space of three hours after, when his wife, not knowing what was done, came in. And Peter answered unto her, Tell me whether ye sold the land for so much? And she said, Yea, for so much. Then Peter said unto her, How is it that ye have agreed together to tempt the Spirit of the Lord? behold, the feet of them which have buried thy husband are at the door, and shall carry thee out. Then fell she down straightway at his feet, and yielded up the ghost: and the young men came in, and found her dead, and, carrying her forth, buried her by her husband. And great fear came upon all the church, and upon as many as heard these things.” Acts 5:1-11

When I decided to relocate to another state mid-year, I didn’t forget about my faith promise. I added up how many weeks were left in the year and paid off what I still owed. God didn’t tell me I had to make that promise to begin with, but since I had, I needed to keep it. I could have mailed the offering in each week, but I didn’t know how my job was going to go at my new location, so I just paid it off in advance to be on the safe side. I was poor in those days, but I scraped up the money by selling some stuff before I left.

That’s great if you can give sacrificially to legitimate missionaries on a regular basis, but don’t be too quick to make a vow to God. Whatever promises you make to God, you had better keep. Better yet, don’t make a financial vow at all.

Email ThisBlogThis!Share to TwitterShare to FacebookShare to Pinterest
Labels: missions

I am head of our missions committee and we do faith promises for missions. We record the amounts then throw away the papers. There's no keeping track of who or how much one promised, that's between them and the Lord. Every year we have more than what was promised. We have been able to send an extra check to each of our missionaries, we have been able to give for a special project one of the missionaries has mentioned, last year we were able to help with the education of one of our missionary's children.
Have there been years in the past we were short, of course, but it's been many years and God still provided for them.