The Bhagavad Gita Exposed as Satanic 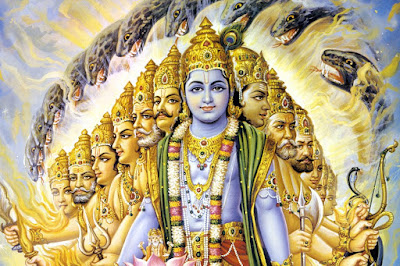 I preached a sermon recently, exposing the false doctrines and weird teachings of the Hindu holy book, “the Bhagavad Gita.” Like other false religions, Hinduism is Satanic.

6 False Teachings of the Bhagavad Gita

1) The Lord of the Bhagavad Gita is the Devil himself.
2) Death doesn't matter, so killing isn't a big deal. (It’s just like changing clothes.)
3) We should not care about the fruits of our labor, which is a socialist philosophy.
4) Your personal, mystical experiences are more important than the scriptures.
5) You should worship your inner being or “self” as God.
6) It gives you the false hope that if you do good deeds, you will not be damned.

Excerpts from the Bhagavad Gita

The so-called "Lord" of this book calls himself “the king of snakes.” Here is another quote from the Bhagavad Gita where he talks about himself:

Here is another quote from the book where the so-called lord is being addressed:

“Oh Lord, I see within your body all the gods and every kind of living creature. I see the creator seated on a lotus. I see the ancient sages and the celestial serpents.”(Chapter 11)

According to the Bible, the great serpent is Satan. Hindus are not worshiping the God we worship. The lord of the Bhagavad Gita is the Devil himself!

“And the great dragon was cast out, that old serpent, called the Devil, and Satan, which deceiveth the whole world: he was cast out into the earth, and his angels were cast out with him.” Revelation 12:9

How do you witness to a Hindu? You do it the same way you witness to everyone else. We don’t need a customized soul-winning plan for every religion because the Romans road is a one size fits all. The same plan of salvation that I present to a Catholic, a Jew, or a Jehovah’s witness is the same one I give to a Hindu. It’s the same Gospel that everyone needs to hear. I always recommend going through the same basic plan of salvation with everyone, and then tagging on at the end any issues that you need to deal with regarding their specific religion. For example, after I go through the basic plan of salvation with a Jehovah's Witness, I then spend a little extra time emphasizing the deity of Christ. At the end of preaching the Gospel to a Hindu, I emphasize the fact that they must trust Christ ALONE and must reject the Hindu gods.

Hindus are tough to reach, but it is possible. I ran into several people down in Guyana, including Pastor Ram Angad, who were raised Hindu but ended up getting saved. Hindus need to hear the Gospel of Jesus Christ. They need to be told that it’s Heaven or Hell, not reincarnation. They need to realize that Jesus Christ is the one true God and put their faith in him alone for salvation.

Here is the sermon where I discuss Hinduism and its influence on “New Age” philosophies.

Here is a link to the plan of salvation in the Hindi language.
Posted by sanderson1611 at 3:00 AM

Email ThisBlogThis!Share to TwitterShare to FacebookShare to Pinterest
Labels: Hinduism