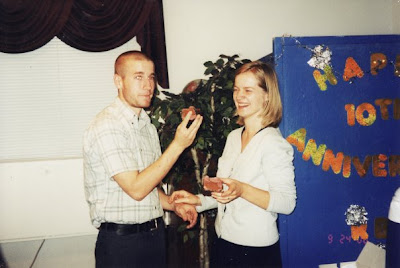 When Zsuzsa got off the plane in Sacramento, I was waiting for her at the end of the jet bridge, standing around the corner and off to the side so I could surprise her. She did not expect to see me until coming out of security, but I popped up out of nowhere and embraced her tightly. This was one of the happiest moments of my life. We had been apart for 19 stressful days, and I had been nervous about her possibly not being let back into the country (they had given her trouble about not having a return flight), but now we were together, and everything was perfect! I had a sufficient job, the apartment would be ready in 4 days, and we were together for good!

After we had hugged and greeted each other, I had another surprise for her. My brother-in-law Bobby and my sister Raani had bought us each white gold rings as a wedding gift. I was already wearing mine, and I presented her with hers. She was thrilled and responded by laughing and saying, "You're mad!" (Remember, she learned how to speak English in Britain, so when she said "mad," she didn't mean "angry.")

We would spend that night (Saturday night) and the next at the Days Inn hotel since our apartment was not quite ready. I wanted to make our "second wedding night" as nice as possible, so I had bought a disposable styrofoam ice chest and put in a bottle of apple juice, a bottle of orange juice, and a bottle of cranberry juice on ice (this was the fundamental baptist equivalent of a bottle of wine). We were just thrilled to be together!

The next morning we went to church at Regency Baptist Church, and my wife was baptized after the morning service. She had already been saved for over a month at this point but had not yet been baptized. The pastor also announced that she and I had just gotten married, so everyone congratulated us after the service. A week or two later, the church gave us a really nice reception since we hadn't had much of a wedding ceremony.

After two nights at the Days Inn and two nights staying in a camper trailer in my sister's driveway, we finally got into our first apartment. We had very little furniture, but we were so happy to be married and in love, we didn't care at all. We slept on a twin size mattress on the floor and did not even have a table and chairs. We had 2 plates, 2 bowls, 2 spoons, 2 forks, 2 knives, 2 glasses, etc. Within a few weeks, my parents gave us a table with 2 chairs as a wedding gift. When we had friends over for dinner, we always had to tell them to bring their own chairs! Then a couple months later, a couple in our church got married and since they had each already lived on their own, they had 2 of everything. They gave us a king size bed (that was a major upgrade!), a sofa, and lots of other furniture and kitchen appliances. That was a major blessing.

Now we have been married for over 12 and a half years, and we are even more "madly" in love than we were back then. After all these years, I still sometimes feel like a newliwed!  I thank God for giving me such an amazing wife and for allowing this crazy story to have a happy ending!

Come back tomorrow for the start of a new blog series!
Posted by sanderson1611 at 1:00 AM

Pastor A and Zsuzsa~

I absolutely loved this love story! I was rivited on the edge of my seat for much of it! I am so teary eyed from reading it.

May the Lord continue to bless your marriage and both of you as you grow closer to each other and to the Lord always.

I probably disagree with you 50% or more of the time, but this story is awesome. God's best to both of you!

Great story! Read all parts, and absolutely love the way you write. It's a talent.

May the Lord continue blessing you Pastor and your family. It's a great pleasure having come across you as a person.

I wish All marriages were as happy as yours and there were no such thing as divorce. Congratulations and Happy Anniversary and may God keep blessing your family.

The Girl Next Door! said...

This was so great!!! LOVE THIS!!! God bless you both and your children!! :D

What a beautiful love story and what a beautiful family you both have!!!!! Made me cry and smile!!!! I love how you didn't spend thousands of dollars and had a simple old fashioned marriage. It's how how my grandma and grandpa got married. Pastor could you please pray for my husband Anthony and me (Amy) to have a baby. We've been married twelve years and lost one baby. I believe I'm saved so I'm praying for miracle baby. God bless you and your family I found you on YouTube. I've been a barren homemaker for so long but whatever Is Gods will. This is soooo hard. Thank you

I like Pastor Anderson's preaching and sermons and I am absolutely amazed reading about your lovestory! You both are blessed!

What an amazing story! I read this twice already and am going to read this again. Thank you for sharing, Pastor!

meant to be, cut and dried. she with her multi-language and film language transposing skills (came in handy later)..and he with his humor and sermoning skills. they have impacted many, many people..including me. inspirational couple and she told him early on she wanted 20 kids! ha..halfway there!

I LOVE your guy's story! I was nervous, excited, laughing, worried, happy...so many emotions!! So sweet!!!