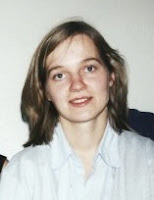 Zsuzsa arrived at the airport at about 5:30pm, and we headed back to my parents house in Roseville. The drive home took over 4 hours because of the Friday night business traffic. This gave us a lot time to talk and get to know each other. I gave her the Gospel again, and we talked about many other things. When we got to Vallejo, I pointed out Marine World to her and said, "By the way, that's where we'll be spending the day tomorrow." I had not yet given her any details about everything I had planned for her visit, so she was pretty impressed and excited when she saw those massive roller coasters from the freeway.

When we arrived at our family's home, she met my parents, and I showed her around the house. I showed her the big bookshelf in my room that I was pretty proud of which had 3 long shelves (I have always love books and done a lot of reading). The top shelf contained about 40 different King James Bibles, the middle shelf was filled with foreign language materials, and the bottom shelf was filled with all the other various books I liked to read. She thought having forty-some Bibles was a little bit excessive. I told her that at least if I were ever burned at the stake, there would be plenty of fuel, and that didn't seem to make her feel any better about it! I wanted to keep talking to her, but I knew she was probably tired from the long trip, so I showed her upstairs to the guest room where she would be staying (my room was downstairs).

The next morning we got up bright and early and headed for Marine World which was about an hour away. When we got to Vallejo, we stopped at a Rite Aid drug store to buy some candy/snacks to throw in my backpack. I distinctly remember the topic of our conversation while we were in the candy aisle: I was trying to convince her why parents must spank their children. Being an unsaved girl from Europe, she had been brainwashed into believing a lot of left-wing ideology such as socialism, feminism, humanism, gay rights, etc., and she was definitely against spanking. I quoted her a lot of Bible verses and explained the rationale behind it. She still wasn't saved, so she didn't get on board with spanking right then and there, but she was definitely considering what I was saying.

We had a REALLY fun day together at Marine World, and we immediately had hit it off and become fast friends. It was definitely one of the best days I had ever had. We saw a few animal shows and rode all the rides. Our favorite ride was called "Thrilla Gorilla." Throughout the day I continued to talk to her about salvation. I really wanted her to get saved, but I didn't want to badger her too much, so at one point I gave the Gospel to a few other people who were waiting in line with us for a ride because I figured that way she would hear it again without me having to bring it up to her yet again.

We talked more on the drive home, and I remember explaining to her why there was no way that evolution could actually be true. She had never in her life even heard of anyone questioning it. She had been told that the Bible was "scientifically inaccurate," taught that the world was flat, etc, so I explained to her all the good science in the Bible and how the "big bang" and evolution were complete nonsense. We got back to the house and went our separate ways.

The next day was Sunday, which would be her first time ever going to any church other than a Catholic church.

So far this has been an entertaining story of how "boy met girl". My mother was born and raised in Bavaria. I was there too during my teenage years, summer of 1982, on a European school group trip.

But...I do find it a little strange that a college age courting couple would discuss spanking children!

My hubby and I first "connected" while talking about raising children as we were in the library looking for books related to a class. We were studying to be teachers.